SLOUGH FEG will release their new album, “Digital Resistance,” this Friday in Europe. In anticipation of this release, the band has partnered up with pitchfork.com to give fans a chance to hear the entire album before it is released. Stream all ten tracks, including the previously released title track and “Laser Enforcer” at pitchfork.com HERE from today through Monday, February 17th!

“Digital Resistance” was recorded with Justin Weis (who produced the album with vocalist/guitarist Mike Scalzi) at Trakworx in South San Francisco from January-October 2013 and marks the band’s first new studio album since 2010’s “The Animal Spirits.” When asked if the new album was a concept album, singer and vocalist Mike Scalzi explained that “Digital Resistance” is a concept album in the sense that The Beatles Sgt. Pepper is a concept album.“It has somewhat of a consistent lyrical theme that runs through several of the songs, but not every song— it is not a concept album in the sense that our “Traveller” album is.”

Check out the landing page and pre-order your copy at metalblade.com/sloughfeg. There’s digital downloads, Digi-CDs and vinyls available. 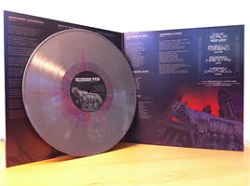 The splatter vinyl is limited to 100 copies and only available from Metal Blade Europe’s ebay store at THIS location!

Mike Scalzi elaborates on the concept behind the title track: “This song represents a last ditch effort to escape the inevitable. There will be no victory over technology– nor should there be in a broader sense— but I do fear what we are becoming. Biological evolution moves so slowly that we cannot perceive it. But social and moral evolution may come in great jolts or leaps. This can be dangerous to the preservation the species, biologically and morally/socially. But it’s also just fun to sing about ‘killing technology’ (like that other band from Canada did a long time ago). It’s a very dramatic subject. That’s why I call it “Voi-Vaudeville”.”

Scalzi discusses the cover art: “The artwork for this album was, as usual, a bit of a struggle. I had no idea how to represent an album called “Digital Resistance”. We finally decided that we wanted the background of Kiss’s “destroyer” album (a city in ruins), but instead of a rendering of our band in the forefront, I wanted the space-dog (Vargr) from “Traveller.” But we’d already used him, so I thought about wolves. I thought maybe a symbol (involving a wolf) representing the birth of a civilization might be appropriate. And that’s what we did—- we put Romulus and Remus, the two mythological children who founded Rome, and were raised by a wolf, in front of this destroyed civilization. What does it have to do with “Digital Resistance”? Modern primitivism? An atavistic civilization? Nothing whatsoever? Well, I suppose only time will tell.”

So what does Mike hope the listener will walk away with after listening to “Digital Resistance”? “Hopefully just enjoyment, entertainment. Perhaps a little bit of a lesson about the dangers of technology’s tendency to sort of dumb us down when things become so easy. The more we indulge in technology and allow it to do everything for us, especially allowing it to think for us (as in the case of looking everything up on your phone or computer rather than trying to remember and retain information), the more physically and mentally “flabby” we become. So there is somewhat of an urgent message, or complaint about this increasingly human tendency.”

Digital Resistance is set for release in Europe on February 14, 2014 and will see SLOUGH FEG on the road soon. The band is working on tour dates as well as firming up a trip to Chicago in July to do the “Ale Horn of Power” Festival.