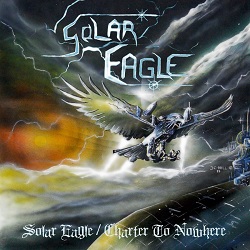 Skol Records announce first official CD reissue of the legendary same titled SOLAR EAGLE debut EP, coupled with the “Charter To Nowhere” album tape (both originally released in 1988 in micro quantity), on the “2 on 1” CD album. Both releases have mystical status between Heavy Metal collectors worldwide, and their original pressings available in sale are a true rarity. SOLAR EAGLE was a Canadian band, hailing from Ontario, active in the second half of the ’80s. Skol Records’ release will include all their recordings from that period, and the CD package – which will be limited to 500 copies – will include thick booklet with all lyrics, liner notes written by band’s guitarist Axe Renwick, and lot of band photos. SOLAR EAGLE‘s style can be described as traditional ’80s Heavy / Power Metal, comparable to acts such as (early) CRIMSON GLORY, MEDIEVAL STEEL or JAG PANZER. The “Solar Eagle / Charter To Nowhere” CD will be available on June 27, 2014, and will be distributed in North and South America by Shadow Kingdom Records.