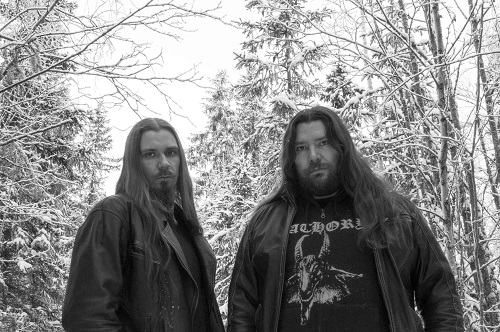 We are extremely proud to announce the signing of the very promising young band: SONS OF CROM.

The music of this Finnish-Swedish duo formed by Janne Posti and Iiro Sarkki can be described as a fantastic mix of different influences among which we could mention BATHORY, ARCTURUS orENSLAVED.

The band comments : “We are honored and extremely pleased to get to work with such a great and dedicated label as Debemur Morti for our first album – together we shall unveil the Riddle of Steel to the world. The combination of our grandiose music and DMP’s passion and knowledge seems a perfect fit, and judging by the label’s back catalogue and the work we’ve already done on this album the result will be nothing short of magnificent.”

Half a year ago, “Victory” was unleashed and it didn’t go unoticed by Metal Observer : “Hopefully this is just the beginning for this band, because they show lots of potential and let’s be honest, who manages to dish out a 12 minute of this quality as first ever recording, got something going on !” 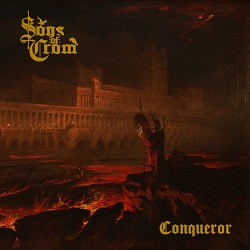 Their debut album, “Riddle Of Steel“, is near completion and will be released in september 2014.
Since we’re nice and willing to help you solve the riddle, we are now offering you a free digital EP ! Indeed, you can already get a taste of their pagan, epic and atmospherically dense Metal by listening to “Conqueror” at the following location: http://dmp666.bandcamp.com/album/conqueror

You can download, share and abuse it for free so we hope you help us spread this epic EP !

SONS OF CROM hail from Haparanda, Sweden and Jyväskylä, Finland. They play epic heavy metal, or bombastic and grandiose pagan/folk metal, if you will. Inspired by heroic cinema, Norse mythology and the legacy of Quorthon, cousins Janne Posti (CHAOSSWORN, ex-CRYPTIC DEATH) and Iiro Sarkki (HEXRVON) joined forces in January 2014 to form SONS OF CROM. They immediately composed and recorded the majestic 12-minute behemoth “Victory”, and released the song as a single. The CD pressing sold out in a matter of days.

In April 2014, SONS OF CROM finished the recording, mixing and mastering process of their debut full-length album, “Riddle of Steel”. The material is very varied with both anthemic hymns, thrashing brutality, soaring atmospheres and danceable folk tunes present, all with the valiant and magniloquent aura intact.

In May 2014, SONS OF CROM engaged in a co-operation with eminent French label Debemur Morti Productions for the release of “Riddle of Steel”. The 7-track, 42-minute album is planned to be released during the Fall of 2014.