Sound Of Contact and sci-fi fans worldwide can check out the exclusive worldwide premiere of the new video for “Pale Blue Dot”on USAToday.com.  The stunning, cosmic-inspired video is taken from the band’s debut album, ‘Dimensionaut’, and follows the journey of a time and space traveller’s mission back on earth to bring about world peace, one human experience at a time.

Sound of Contact is the progressive rock band from vocalist/drummer/composer/producer and solo recording artist, Simon Collins (son of legendary musician Phil Collins).  With a distinguished musical familial lineage, Collins has established himself as a preeminent performer with the release of several solo albums.  Melding elegant melodies with electronica-tinged hard rock and intimate lyrics, Collins has created a distinct sound all his own.  With this new project/musical collaboration, Sound Of Contact, Collins delves further into the futuristic aspect of his songcraft, all the while incorporating elements of progressive rock that are his musical heritage. 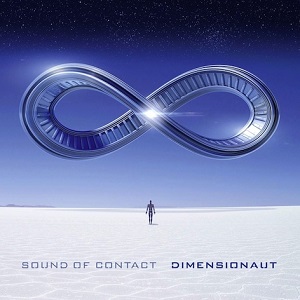 Sound of Contact will be appearing live this April, firstly on The Moody Blues Cruise (2nd-7th) and following immediately after on Cruise To The Edge (7th-12th). The band are also scheduled to perform at ROSfest in the US on the 3rd May 2014.