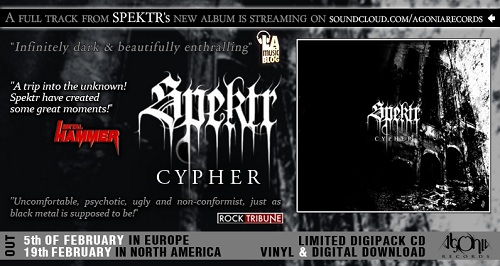 The French duo – who’s identity remains shrouded in mystery – will release the new opus on the 19th of February in North Amercia on Agonia Records. The release is already available in Europe.

“Cypher” is an experimental black metal album, recorded entirely without vocals except sampling. The album introduces industrial and ambient elements and as a whole should be considered as a strongly psychedelic release; it produces a feeling, as if the mind of the listener, dragged into the music, were unable of concentrate itself or were experiencing a powerful hallucinogen effect.

Successor of “Near Death Experience” (from 2006) will is made available as CD, Vinyl (150 on white & 150 on black vinyl) and digital download. “Cypher”includes 9 new tracks:

“Cypher” can be ordered at: http://www.agoniarecords.com/index.php?pos=shop&lang=en