Bay Area bands Bosse-de-Nage and Deafheaven are gearing up to release a split LP on November 20th for Flenser Records.  The album will feature two tracks-  the Bosse-de-Nage original track “A Mimesis of Purpose” and Deafheaven’s cover of Mogwai’s “Punk Rock / Cody” (which premiered last month on Pitchfork) and will be available on digital and 12 inch vinyl, mastered at 45 RPM.  There will also be a limited edition of 200 LP’s on purple and black marbled vinyl directly from Flenser, which can be pre-ordered now here. 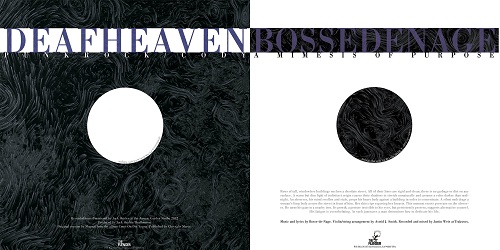 In celebration of their split release coming November 20th from Flenser Records, Deafheaven and Bosse-de-Nage will be playing a record release show (also featuring Wreck and Reference) on November 30th at DNA Lounge in their hometown of San Francisco, CA.  Tickets are $8 and the show is all ages – more information can be found here.

Check it out here: http://stereogum.com/1191192/bosse-de-nage-a-mimesis-of-purpose-stereogum-premiere/mp3s/