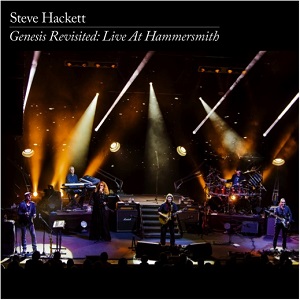 It takes a legend to bring a myth back to life. A unique treat for music fans worldwide, Steve Hackett’s critically acclaimed live production ‘Genesis Revisited’ has so far triumphed in Europe, Japan and North America alike and is still going strong; on May 10th it celebrated its success at a sold out London’s Hammersmith Apollo with an ecstatic audience. Genesis Revisited – Live at Hammersmith – a unique performance with guests including Nik Kershaw, John Wetton, Jakko Jakszyk and Steve Rothery – will be released on October 21st.   The 3CD+2DVD (with 5.1) box set, coincides with the return of Hackett’s Genesis Revisited Tour to the UK & Europe for a second round due to popular demand.

The pioneering guitarist comments:  “The 5.1 DVD with stereo CD out on 21st October including the whole show from Hammersmith Apollo is a feast for all the senses. I was blown away by the fantastic response to those May UK gigs. The autumn Genesis Revisited shows will include different Genesis material to before as well as all the big faves that bring the house down…See you all soon!”

Details of the DVD/CD set as follows:

CD2
1. Unquiet Slumbers for the Sleepers
2. In That Quiet Earth
3. Afterglow
4. I Know What I Like
5. Dance on a Volcano
6. Entangled
7. Eleventh Earl of Mar
8. Supper’s Ready

DVD2
Behind the scenes featurette

The Genesis Revisited tour continues this Autumn with dates in UK & US as follows: