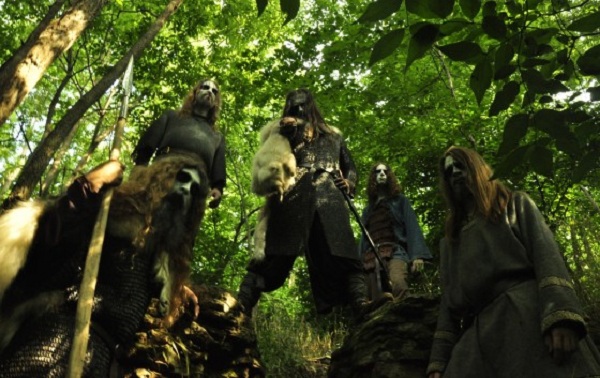 The cover art — a scene meant as a direct correlation to the mood of the record — was crafted by the band’s own Caleb May and depicts late 10th century King Olaf Trygvason of Norway and his men at the Godey Isles, torturing Raud the Strong. According to text, Raud was a priest of the local Scandinavian pagan religion, and had refused to convert to Christianity at the point of King Olaf’s sword. Seizing him from his bed at night, they dragged him outside, where Raud refused conversion once more. The king decided he should die the worst of ways publicly to set an example. Thus, Raud was held down and after many attempts — including the use of a drinking horn and hot poker — he was forced to swallow a snake. The title in turn is meant to resemble the tongue-in-cheek chapter titles of many Icelandic Sagas. Two kennings are used, old-strife (representing historical woes) and man-banes (swords). Kennings are a type of old Scandinavian figure of speech found in Sagas and other writing.

“We pride ourselves on our theme and style,” commented the band in a collective statement. “Our album is the end product of years of hard work. It captures the horrors of old world Europe: atrocity, murder, and Norse Heathenism. From aggressive black metal riffs to magnificent Viking melodies, Concerning Old-Strife And Man-Banes encapsulates a journey into the terrifying past of our ancestors.” 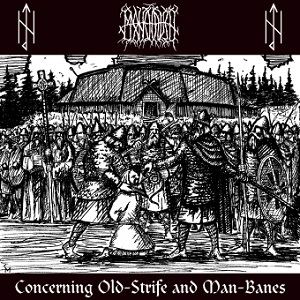 Check out “Addressing A Scorn Pole” at the band’s OFFICIAL FACEBOOK PAGE.

Formed in 2005 from the ashes of an earlier musical feat Witchlord, STONEHAVEN released their self-released debut, Of Oak And Iron, in 2010. Noted Metal Maniacs of the offering: “Any fan of black metal will love this… the black metal plague has spread to the heartland of America and STONEHAVEN from Kansas City are leading the way!” Following two successful tours of the western United States, STONEHAVEN strives to make dust of this world with , Concerning Old-Strife And Man-Banes.