WRAITH PRODUCTIONS sets May 13th as the release date for STRAFK‘s Phaseshifting debut. A mysterious Russian duo of Leegheid and Stof, STRAFK present Phaseshifting as a four-phase EP. These four phases are divided into four correlating tracks. The listener phase-shifts into a kind of audial abduction almost like a meditative paralysis, transcending visions through audio waves. The tone is set on the DOOMescent lines of black metal/rock – slow, dark, and hallow, like an abandoned insane asylum. The unearthing of this recording should not be disregarded due to its recent creation in the capital of spring and summer of the year 2013. The nature of the music seems untouched by time but carries a resemblance of a modern reoccurring sound that stems from the Slavic regions. Thus, we are left with resonance that is phase-shifting. 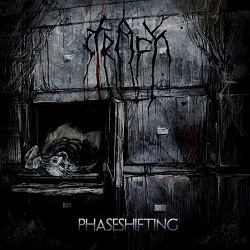