Whilst not known for actually naming any of their tracks, SUCHTHAUS, the brainchild of sculptor and stage designer Spacebrain, have released a video of a track from the band’s recent debut album “The Dark Side and the Bright Side”, which they have called “DownTown Train”. The track itself features SKITLIV’s Maniac both on vocals and in the video itself, and it is the first time that the legendary frontman has appeared on a track with his former MAYHEM colleague Hellhammer since splitting with the band several years ago and forming SKITLIV. The “DownTown Train” video, which is directed and produced by Spacebrain and features Maniac as the Jesus-loving white trash main character can be seen at http://www.youtube.com/watch?v=wOZ_8rvYF5k

Commenting on the track itself and on the video Spacebrain, who has largely left behind his days as a sculptor to create music which is then visualised through video, had this to say: “The track started out with me on guitars and bass, which I multi tracked. I played it to my old friend Maniac and he liked it the moment he heard it, so much so, in fact, that he agreed to perform guest vocals on the track, and within 15 minutes of hearing it he’d written the lyrics. We decided to add some drums, but finding a drummer within our circle of acquaintances who was available and could follow the complex jazz beat we wanted wasn’t easy. In the end we realised that Hellhammer was probably the only drummer up to the task. On this occasion Hellhammer used none of the triggers and gadgets he would normally have used and recorded it on the kind of drum kit that LED ZEPPLIN’s John Bonham used, which gave his playing a much jazzier feel. He recorded his part in one take, after which Hellhammer and SUCHTHAUS decided to work more closely together in the future”. 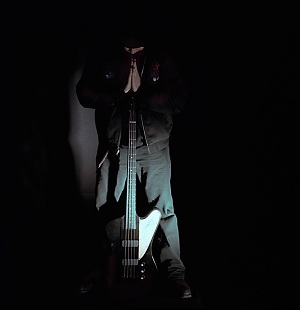 SUCHTHAUS itself is formed of the nucleus of Spacebrain and Fruen, with a fluid line up that varies as the fancy takes them, whilst the list of guests and collaborators on “The Dark Side and the Bright Side”, which was released in December of last year on Rollabigone Records, is as eclectic as the band itself. Aside from Maniac and Hellhammer, you will find CURRENT 93’s David Tibet, Ingvar Magnusson of SKITLIV, Fredrik A. Juell of BURNING RUBBER and BERSERK BASTARDS, and Sibob Jawara who has sung the world-over but had never used a microphone before recording with SUCHTHAUS.

According to Spacebrain SUCHTHAUS is “a reflection of our own musical preferences and you can’t therefore squeeze it into some particular genre. Every track on “The Dark Side and the Bright Side” has its own individual character – the atmosphere changing with our mood and the amount of drugs and alcohol we consume while we’re making the sounds and it varies from the very dark to the very bright. Most tracks are an experiment with sounds, and we start each one with no plan or idea of where the piece will lead us. Some tracks are made as a one man project; others have 7-8 contributors. The best way to describe what we do is that instead of making visual sculptures, we try to make sound sculptures, although we do visualize them with the help of videos”. More information about SUCHTHAUS can be found at http://www.suchthaus.no