The re-release of the legendary SUICIDAL ANGELS album “Eternal Domination” is out now! NoiseArt Records has released the album with bonus material today! The band explains: “A lot of people have been asking for our debut album, saying they can’t find it anywhere and it’s true. Some of them have even been victims of fraud by buying a supposedly original copy, and getting some cheap bootleg or imitation of the actual thing. So we decided it was about time to put it out there again, so people can know the band’s roots and get a more complete image of our evolution so far.”

The limited digi pack of the album includes a bonus CD with the EPs “Bloodthirsty Humanity” and “Armies of Hell”. A vinyl version of “Eternal Domination” has already been released by NoiseArt Records in 2011 and is also available.

Here you can order the limited digi pack: http://shop.noiseart.cc/p13-38-413/SUICIDAL-ANGELS-Eternal-Domination-LIMITED-DIGIPACK# 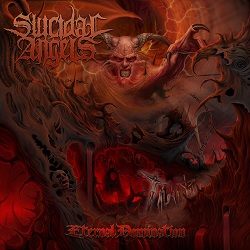 The vinyl versions are available here: