SUICIDE SILENCE will release »You Can’t Stop Me«, their first album to feature new vocalist Eddie Hermida (ex-ALL SHALL PERISH) and their first since the tragic loss of singer Mitch Lucker, on July 11 (Europe), July 14 (UK) and July 15, 2014 (North America) via Nuclear Blast Entertainment. »You Can’t Stop Me« was produced and mixed by Steve Evetts (SEPULTURA, THE DILLINGER ESCAPE PLAN, WARBRINGER), who worked with the band not only on »The Black Crown«, but also on some instrumental demos just prior to the tragedy of Fall 2012.

“The long and short of it is this,” explains guitarist Mark Heylmun. “Mitch left behind a set of lyrics with the title You Can’t Stop Me. This gave us chills to say the least and we knew we had the title and title track. This filled us with inspiration for writing sessions to empower us and empower you, the supporters of SUICIDE SILENCE.

»You Can’t Stop Me« is out July 11th on Nuclear Blast, go pick up a copy and turn this sucker up to eleven. We couldn’t be more excited. Thank you all for supporting SUICIDE SILENCE.” 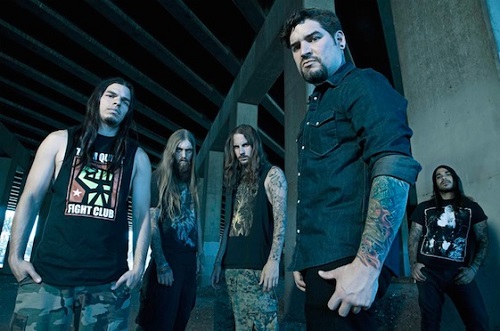 Vocalist Eddie Hermida most recently made his official live debut with the band, during this year’s installment of the Soundwave Festival in Australia. An interview with the band right before their first show of that tour can be viewed here.

SUICIDE SILENCE‘s latest album, »The Black Crown«, sold nearly 15,000 copies in the United States in its first week of release to debut at position No. 28 on The Billboard 200 chart.