Whoever thinks in February that winter could never be longer and darker, will be wrong next year. On Feb 7th the new album  “Ultimatum Necrophilia” from Norwegian Black Metal five SVARTTJERN will be released and turn the world a lot blacker at once. The band has recorded eleven songs. Here is a teaser that might get you a first impression of what exactly is approaching:

Just like the recent Albums the band has worked with Marius Strand – except the guitars that have been recorded in Sæther Studios all parts have been produced in his studio. For the cover artwork Linda K Røed is responsible who has also already worked for GLITTERTIND and DARKTHRONE.

SVARTTJERN sthemselves are describing the sound of „Ultimatum Necrophilia“ as follows: „It ´s eleven tracks full of Black Metal. The sound is a logical follow up to the last two records. For SVARTTJERN simply fits a modern but though brutal and martial sound, just like we achieved it on „Ultimatum Necrophilia“. Creative wise we have taken a darker and more psychedelic path this time. We took use of more destroying riffs along with the great growls of HansFyrste.“

This way „Ultimatum Necrophilia“ shows ist blasphemic, rich of variety constructed face. Cold, classic Black Metal meets modern and interesting arrangements, all in the name of the horned one! Whoever got bored by Post Black Metal, Shoegaze BM and other weakened versions of a once monumental and unique sound, will be grateful with SVARTTJERN – cause „Ultimatum Necrophilia“ Black Metal simply sounds like it should: unholy, dangerous and deeply black! The album will be released on Feb th 2014 vi NoiseArt Records and also the same day the band embarks on a European tour with  Behemoth/Cradle Of Filth. 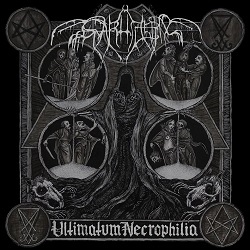 1. Shallow Preacher
2. Aged Burden Fades
3. From Caves To Dust
4. Ultimatum, Necrophilia
5. Fierce Fires
6. Hymns For The Molested
7. Where There Is Lust
8. Flourish To Succumb
9. For Those In Doubt
10. Philosophers, Adore Me Now
11. Aroused Self-Extinction Pt.II