The Swedish thrash metal band MASS DISTRACTION has inked with Mighty Music and will release their debut album “Follow The Rats” January 28th 2013. The critically acclaimed album has already been released in Sweden in August and will now be released in the rest of Europe. Get ready for a punch in the face and a must-have for all thrash metal enthusiasts!

MASSDISTRACTION was founded by the end of 2007 by guitarist Jon Hjalmarsson and his brother Per. The band has undergone numerous line-up changes before finding the current and final line-up consisting of guitarists Jon Hjalmarsson and Ali Nassadjpoor, drummer David Larsson, bassist Kalle Möllerström and last but not least the metal monster vocalist Mikkjal G. Hansen.

Known as an energetic live-act that tears the stage apart, MASSDISTRACTION has opened for bands such as Hatesphere, Mnemic and Raised Fist. They were also appointed as the best unsigned metal band in southern Sweden 2011 in the competition “Released -Live and unsigned” by a jury consisting of people from Sweden Rock Festival, Jägermeister and Warner Music.

Without even having a record deal at the time, the band entered the studio in the fall of 2011 to record their first full-length album, “Follow The Rats”, with founder/guitarist Jon Hjalmarsson acting as producer, engineer and mixer. The album was recorded and mixed in a six months period and was later mastered by the famous heavy metal mastering engineer Dragan Tanaskovic (In Flames, Mustasch e.t.c.) at Bohus Sound in Kungälv in 2012.

The acclaimed Swedish magazine Close-Up praised “Follow The Rats” and called it a: “A cool debut that claims an ample space in the mosh pit..”. Furthermore the daily newspaper City Malmö accompanies with: “Massdistraction sets the bar at Olympic levels from the very start”. 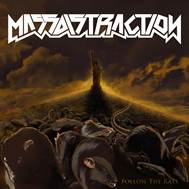