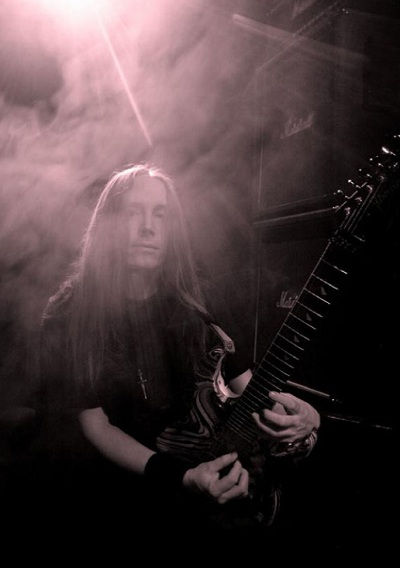 Stefan Lindholm was born in Stockholm, Sweden in 1973 and picked up the guitar at the age of 15 after his father bought him his first electric guitar, which incidentally was the well known and highly appreciated: “Emperador Strat” from the Kasuga Factory in Japan, which he played through a Squire 15-watt amplifier to his neighbourghs cheerful delight. After two years of intensive playing, he took private tutoring from guitarist Mike Wead, known for his involvement with bands such as: “Candlemass”, “The Haunted”, “King Diamond”, “Momento Mori” and “Hexenhaus”.

The first band Stefan ever started, was with the aid of singer Pier Krentzel in 1995, and the constellation was soon named: “Endless Circle”. Additional bandmembers where Mikael Kvist, who would later join forces with danish band: “Fate”. Relatively soon, extra guitarist Mikael Bergenmalm was added to the band and lastly, bassplayer Dagna Plebanek. At this time they decided to changed the bandname to: “Globan Dreams” for further appeal.

In the coming years, Global Dreams parted ways with Krentezel which gave singerJonny Berntsson chance to join the lineup. Due to musical difficulties, Stefan decided to dissolve the band, which later on sprung to become: “Elsephere” without his involvement. Between 1998 and 2002, Stefan took four years of absence to pursue other interests. At the end of some fruitful endeavours, the time was right to compose music for the first demo of what was to become: “Vindictiv”.

Vindictiv as a band, started in early 2004, when Stefan got in touch with keyboard player Pontus Larsson to work and record some songs. They recorded a demo with current “Seventh Wonder” singer Tommy Karevik which was received with great enthusiasm and got good reviews, amongst them, high praise in the best hard-rock mag in Scandinavia: “Sweden Rock Magazine”. Stefan would go on and contact one of swedens finest vocalists, Göran Edman (Madison, John Norum, Yngwie Malmsteen, Docker’s Guild and many more) – for future collaborations. Edman really liked what he heard, so next up was to recruit was Nalle Påhlsson (Zan-Clan, Treat) and also drummerMikael Wikman.

Vindictiv would go on to release two albums, the self-titled debut in 2008 and “Ground Zero” in 2009 (a new album is in the making). Apart from his main band, Stefan has been a successful soloist on a number of albums, amongst them in record producer Tom Galleys international project: “Phenomena” and: “Soulspell” (Jon Oliva, Tim ‘Ripper’ Owens, Roland Grapow) – to name a few. Other great vocalists Stefan has worked with include: Tony Martin (Black Sabbath), Oliver Hartmann (At Vance, Avantasia) and Mark Boals (Yngwie Malmsteen, Ring of Fire).