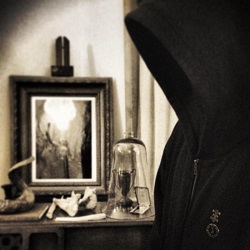 As Crucial Blast prepares for the disbursement of the Pennhurst / Xesse obscure works collection from black/industrial metal cult, T.O.M.B., several selections from the ominous release have been posted.

Pennhurst / Xesse collects two rare out-of-print recordings from T.O.M.B. — a.k.a. Total Occultic Mechanical Blasphemy — a Philadelphia-area collective bearing residents of occult folk/noise band Dreadlords (Not Just Religious Music) and satellite members from parts unknown who unite to specialize in disparaging audiotorture and purely horrifying noisescapes. With well over an hour of nightmarish harshness and ethereal disturbances, much of which was captured in abandoned mental prisons, fans of Nekrasov, Gnaw Their Tongues, Nordvargr, Melek Tha, Wolfskin and other gruesome sonic manipulation must not miss this slab when issued by Crucial Blast on April 15th.

Several tracks from Pennhurst / Xesse as well as physical and digital preorders are now live AT THIS LOCATION.

Originally released in 2009 as an extremely limited CDR, Pennhurst features five tracks of abysmal necro-industrial filth, formed from source material T.O.M.B. recorded at the notorious Pennhurst State and Norristown State Hospitals — two Philadelphia-area mental asylums that have boasted disturbing legacies of abuse and experimentation in the past. As with their other releases, this centers around nightmarish industrial soundscapes built from the band’s blighted blackened electronics and creepy field recordings, the tracks often erupting into blasts of suffocating hellish noise. The whole thing adds up to one of T.O.M.B.‘s most intense blasts of sonic terror. The other half features Xesse, one of the band’s more “ambient” works, constantly shifting between placid lifeless drones and strange echoing graveyard rituals and the swells of hallucinatory heaviness, eventually giving way to some seriously mind-melting cosmic drift towards the end. The voices shift from blasphemous ranting to garbled unknown tongues as it drifts out into an abyss of swirling dub effects, delicate chiming tones, and rhythmic metal pounding that finally erupts into frantic percussive chaos, the thunder of hammers on metal shaking the chthonic depths, then fading into silence.