Australian heavy metallers TABERAH have set Friday, September 13th as the worldwide release date for their new album, Necromancer, via Dust On The Tracks Records.

The CD was engineered by Theo B (Scorpion), produced and mixed by Joe Haley (Psycroptic) and mastered by Australian Metal Icon “Stu Marshall” (Death Dealer, Empires Of Eden, Dungeon, Paindivision). The artwork was made by Hannah Flowers, who is a talented Tasmanian tattoo artist. 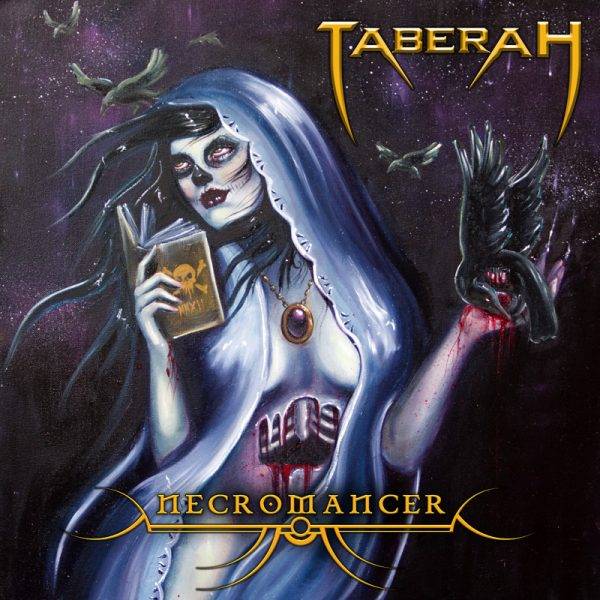 Stu Marshall (Death Dealer, Empires Of Eden, Dungeon, Paindivision) stated: “TABERAH’s NECROMANCER is one of the best metal releases to come out of Australia in the last 10 years”.

Inspired by their strong musical bond Jonathon Barwick and Tom Brockman created, in 2004, what is now known as TABERAH. The bands sound and live performance is derived from a vast range of influences including the traditional heavy metal stylings of Iron Maiden + Black Sabbath, the rock n roll swagger of AC/DC + Thin Lizzy mixed with the over the top, tongue in cheek theatrics of Queen + The Darkness. All with a slightly modern and original twist.

Taberah quickly became a staple act in the Tasmanian live music scene in 2006 and have now become one of Tasmania’s top exports around Australia in any musical genre. In early 2011 TABERAH blitzed a nationwide vote then were hand picked by Lemmy Kilmister himself to open for Motorhead (UK) on the Sydney leg of their 2011 Australian tour.

2011 saw the band record & release their debut album “The Light Of Which I Dream” with acclaimed Producer Joe Haley of Psycroptic. The record is a chronicle of the bands early years of blood, sweat, beers and tears on the national live circuit. The album earned TABERAH worldwide acclaim.

In support of “NECROMANCER“, TABERAH have their sights firmly set on the international stage for 2013/14. This includes plans for a run of shows in the Europe, USA, Japan as well as high profile international/national supports in Australia.

TABERAH deliver a show that is full of energy, fun, theatrics, wandering solos and plenty of crowd interaction. This earning the quartet a solid reputation of being a “must see” live band.

Hot News: Taberah signs with Dust On The Tracks Records