The evocative music of this enigmatic project can be described as an acoustic and subtle structure of magical arpeggios, an Artistic approach deeply anchored in the dark medieval times, which envelops the listener in a heavenly wave of spiritual sound.

The tracklist is as follows: 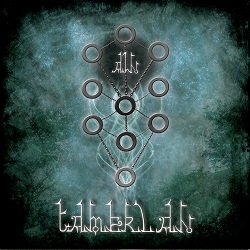 The cover art and layout were conceived and realized by Cecilia Bjärgö.

On this new offering Timur Iskandarov, the maestro, surrounded himself with talented guests which consist of :

To familiarize yourself with the sound of TAMERLAN, and because it speaks for itself, a brand new video realized for the song “Eternal” is available at the following location: https://www.youtube.com/watch?v=RhEl7iqHTEU

“Ain” will carry you to otherworldly realms…

TAMERLAN, originated in 2006, as a language, life style, creative tool, or weapon (if you will) ofTimur Iskandarov, with the sole purpose of abolishing all the limitations within this world and destroying the walls which separate the reality we know, from many other realities we are driven away from.

From the first steps of exploration of the mystical and minimalistic ethereal soundscapes, to the occult folk works presented nowadays, the sole purpose of Tamerlan was connection to the forces and energies that make us the supreme beings of this world. Forces and energies we, as humans, have given up upon.

The expression of TAMERLAN was done through the albums, compilations, splits, live performances and collaborations with many like minded artists.

Throughout his life, Timur, and with him TAMERLAN, has always been on the move… Through Russia, Uzbekistan, Serbia, Turkey, and more, getting the inspiration from every moment seen and lived. This journey and spiritual/artistic evolution is something that will continue along with the new journeys and roads built ahead.