Doogie says, “We started writing for the new album last autumn and after a week or two we took the tapes and put a razor through them. We had just come back from a successful series of concerts and we were really vibed up. Listening to what we had laid down we knew we could do better. So taking a fresh approach we started throwing ideas around. I am very pleased with how it is all sounding now.

Cliff, “As with our ‘War Machine album, ‘War Nation’ will include a variety of different influences and styles. With a wealth of musical ability to draw from, we don’t like to limit ourselves. Individually we’ve worked with names such as Ritchie Blackmore, Bruce Dickinson, Paul D’anno and Yngwie Malmsteen. So many bands release albums now where once you’ve listened to the first two songs you’ve heard the whole album. Not with Tank. Each song that makes it onto our album has to deserve it. Our standards are high.”

Doogie continues, “With songs like ‘Justice for All’ and ‘Grace of God’ we are upgrading the TANK sound while retaining all the elements that made ‘War Machine’ so successful. There are killer riffs and haunting melodies and lyrics that you can take from, what you want, or indeed what you need.
I did not want the album to be titled after a song. But I was overruled by the other guys so the album will be called ‘War Nation’. With all that has been going on in the world over the last while, it appears that a great many people in the nations of the world are not prepared to put up with the status quo anymore. Whether its ruthless dictators, corrupt politicians and bankers, religious godheads. The people are restless and screaming ‘Damnation, War Nation’.”

TANK will release their first ever live DVD this year. Recordings were made while opening for Judas Priest in 2011 and further footage will be captured during the bands show at Stodola, Warsaw on March 9th 2012. The set list will include fan favourites such as ‘This Means War’ ‘Echoes of a Distant Battle’ ‘Power of the Hunter’ and ‘ The War Drags Ever On’ plus future classics such as ‘Judgement Day’ and ‘Phoenix Rising’. 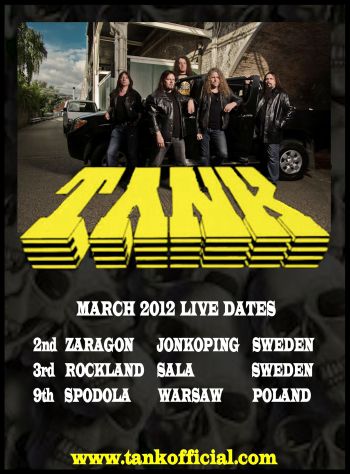 Full details on “War Nation” to be announced soon.