Legendary British band Tank finish editing their first live DVD, which is planned to be released in November. It’s their second release this year after the well-received studio album “War Nation”.

The DVD entitled “War Machine Live” will feature live performances filmed in Poland in 2011 and 2012 plus band interviews, on the road footage and the promo video for the title song from their most recent album. Cliff Evans comments: “This is our first official live DVD release so we wanted to make sure it would appeal to all Tank fans, old and new. With such an extensive back catalog to choose from, we think we’ve selected some real gems that all fans of real British metal will enjoy. We’ve captured the raw energy that Tank is known for in a performance that features classic tracks such as ‘This Means War’, ‘Power of the Hunter’ and ‘Honour and Blood’ plus new fan favourites ‘Judgement Day’ and ‘Phoenix Rising’. Also featured is a live version of the new song ‘Don’t Dream in the Dark’ from our latest album ‘War Nation’. With a band whose members have previously played with such names as Ritchie Blackmore, Bruce Dickinson, Yngwie Malmsteen, Paul Dianno and Michael Schenker you know with that kind of pedigree the music is going to kick some serious ass.”

The release date of the DVD is scheduled for November, 12th in Europe and December, 11th in USA (via MVD). Full details to be revealed soon. 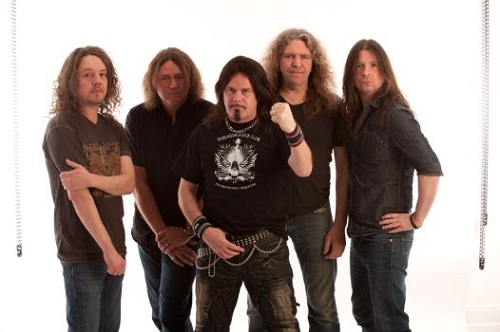 The band plan to promote the DVD on a tour in Europe in December, 2012. Evans: “It’s been a while since our last shows earlier this year in Scandinavia and Poland so we’re looking forward to hitting the road again and making some noise. We’ll be adding songs from our new album ‘War Nation’ to the set plus a couple from ‘War Machine’ plus all the old classics. The tour will be announced in the coming weeks.”

TANK have now been confirmed to appear at the ROCKHARD 2013 Festival in Germany.