Tank, the legendary British Heavy Metal Band, kicks off their European ‘War Machine’ tour in early August. They start with a couple of shows in England, then they move to Poland to be a part of Metal Hammer Festival (along with Judas Priest, Morbid Angel, Exodus, Vader to name a few) and later they visit countries like Norway, Sweden, Germany, Portugal, Spain, Holland and Belgium.

The band is very excited about the forthcoming tour: “The band members are delighted with the response to the tour dates so far and are looking forward to meeting as many fans as possible in all ten different countries that we are playing in. Everyone involved is looking forward to unleashing this live set which will include many classic Tank anthems as well as several tracks from our acclaimed ‘War Machine’ album (2010, Metal Mind Productions). Tank drummer Mark Cross (Firewind, Helloween), who joined the ranks in April, is a very welcome addition to the band and has provided an extra dimension. Wait until you hear this!”

Tank is going to document the tour on their official site in real time so the fans can follow them around Europe as ‘War Machine’ makes its way through the continent. 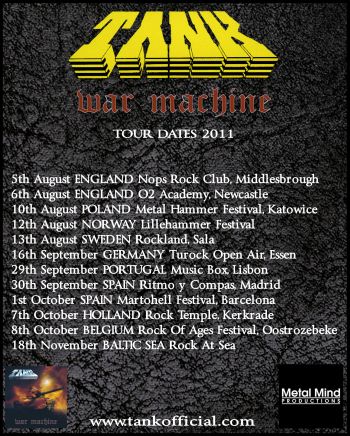 Here are the confirmed dates so far:

More dates to be added soon!

Hot News – Tank has started to work on a new album