Multi-platinum guitar icon TED NUGENT will release ULTRALIVE BALLISTICROCK, a new 2 CD+DVD release available in three formats (2CD+DVD deluxe edition digipak, DVD/Blu-Ray and digital download), on October 18 in Europe and October 22 in North America on Frontiers Records. The live footage was captured and recorded by 7 cameras in 5.1 audio mix on the “I Still Believe Tour” at Penn’s Peak on August 14, 2011.

The lineup on the album consists of the legendary-and-still-raging NUGENT on guitar and vocals,Derek St. Holmes (rhythm guitarist and the voice on Stranglehold) on guitar and vocals, Greg Smith(Rainbow) on bass and Mick Brown (Dokken) on drums. The set-list is killer (see below), packed with the songs that forever changed the face of rock, and the performances are razor sharp and electrifying, adding up to a sonic and visual extravaganza that’s not to be missed.

Says NUGENT, “To be surrounded by such world-class passionate virtuosos is every musician’s dream and I live it every song, every concert, every night, every lick, every tsunami of soul sweat. You dogs deserve me!”

DVD/Blu-Ray Bonus Footage:
“Spirit of the Wild”
“The Making of ULTRALIVE BALLISTICROCK” 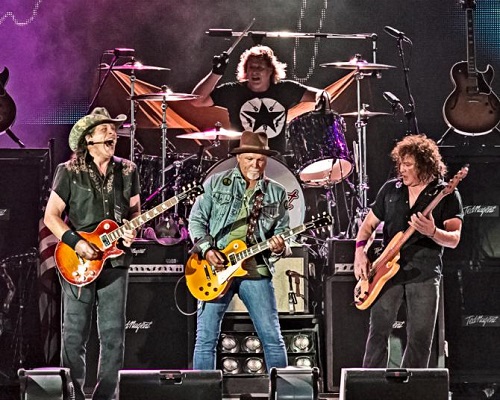 About Ted Nugent:
Ted Nugent has carved a permanent place in rock & roll history as the ultimate guitar-shredding showman, selling more than 40 million albums, performing more than 6,500 (!) high-octane concerts, and continuing to set attendance records at venues around the globe. Ted’s no-holds barred career spans five decades of multi-platinum hits. From the ground breaking Amboy Dukes’ hit “Journey to the Center of the Mind,” to classics like “Stranglehold” (ranked in the Top 100 Classic Rock Songs and #1 Guitar Lick), “Cat Scratch Fever,” (32nd Best Hard Rock Song of All Time) Damn Yankees’ chartbuster “High Enough,” and cult classic “Fred Bear” (the most requested song for radio airplay in Michigan & Wisconsin), Ted and his inimitable sound have been featured on VH1’s Behind the Music, A & E’s Biography and more.
Nugent was named Detroit’s Greatest Guitar Player of All Time by readers of MLive! For millions of passionate music lovers everywhere, Ted delivers the Ultimate Life Soundtrack. A Ted Nugent show is not just a performance – it’s a firebreathing celebration!

For the latest on TED NUGENT, including tour dates, visit:
www.tednugent.com
www.facebook.com/tednugent