THAUROROD leapt out of the Finnish underground in 2010: after the newcomers made quite some heads turn with their first three EPs, their debut „Upon haunted battlefields“ put them right on the map with the big players of metal! No wonder they were picked as support act for SABATON`s EU tour– and in 2011 THAUROROD gained even more fans on tour with SYMPHONY X and NEVERMORE.

Their secret for success? Their unique version of epic symphonic metal and power metal! The sixpiece is often compared to genre overlords SONATA ARCTICA, DRAGONFORCE and STRATOVARIUS, but the band has managed to carve a niche of its own.

Just like it was the case with “Upon haunted battlefields”, the cover artwork for „Anteinferno“ has been taken care of by Ken Kelly of MANOWAR fame. „I found this masterpiece with all the strong colors of the flames and a warrior on a horse and thought it would fit perfectly, but also would reflect the battle themes and the theme of the last song which is about the world’s biggest horse breed, the Shire horse, which was used in medieval battles ages ago. So I would say it’s a pretty perfect cover for this album!” explains Pasi Tanskanen. 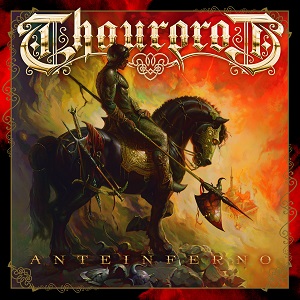 The album will be released in Europe on December 20 through NoiseArt Records and will be available as CD and download. In Japan, the record is due on December 11 via Spiritual Beast featuring an exclusive bonus track called „Japskin Syylä“.

Hot News: Thaurorod – high up in the air: video message to the new album coming from a cockpit!