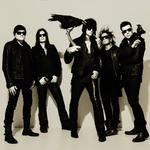 Helsinki Vampires, THE 69 EYES, have released a lyric video for the first single, „Red“, off of their upcoming album, „X“.

“This is THE 69 EYES at the most melodic but even more than that, the most intense. The song has a very intense feeling, you know, like when your heart beats wild (red), when the world circles around you and when you find out the painful truth. Think of those scenes in the movies like “Vertigo” or “Vanilla Sky”. Something’s broken and there’s nothing you can do about it”, dramatizes THE 69 EYES vocalist Jyrki. “It’s a very epic and emotional song.”

Check out the lyric video at: http://youtu.be/dSgrpoQJFIA

„Red“ is now available as digital download at http://www.itunes.com/the69eyes

The band also recently shot a video for „Red“ together with renowned producer, Patric Ullaeus. The video is going to be released shortly.

Hot News: The 69 Eyes – to be featured in Finnish reality TV show!

Hot News: The 69 Eyes – Check in From Video Shoot!