After the loss of longtime friend and bandmate Hunter Holland, the band formerly known as “Gollum” reforms under the new pseudonym HADEA and release their crushing comeback album “Fabric of Intention”.

Hadea from Cape Fear, North Carolina has been through more than most bands. After ten years of roaming the US as Gollum, founding member and drummer Hunter Holland suddenly passed away, and the band was left devastated.

Gollum had played venues and festivals all over the US for thousands of raging metalheads supporting some of the biggest names on the continent such as Slayer,Mastodon and Chimaira. They also released two full-length albums, the former featuring the king of “pure american metal” D. Randall Blythe of Lamb of God, the latter grabbing the attention of L.A.-based label Rotten Records (Goatwhore, Dog Fashion Disco, Acid Bath), which both received tons of good reviews. But then just as things were really about to take off for Gollum, disaster struck…

After a period of grieving and contemplating over the future, the band overcame the tremendous setback of losing Holland, and decided to put the name Gollum to rest in respect of him, and reform as Hadea.

Hadea is now ready with a new powerhouse-of-an-album “Fabric of Intention”! On“Fabric of Intention” the band picks up where they left off as Gollum with their trademark groove metal, but now with a newfound musical experimentation in 10 powerful songs that will please fans of Mastodon, Between the Buried and Me, Neurosis, Tool, etc.
The album was recorded by Hadea’s own Frank Stroehmer, and mixed and mastered by Jamie King (Between the Buried and Me). The band recently inked a deal with the leading Danish metal label Mighty Music to release “Fabric of Intention” worldwide.

Hadea has already premiered the video for the track “Hinge” off “Fabric of Intention”, which can be seen here. The video was directed by Patrick Kendall, who is mostly known for his work with legendary thrash masters Megadeth. 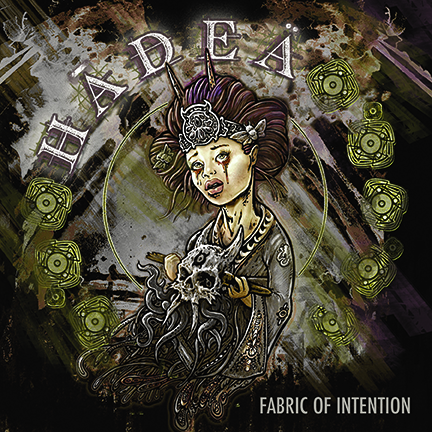 Tracklist:
1. Hinge
2. Fabric of Intention
3. One Guarantee
4. Reconstruction of our Ways
5. Nowhere to be Found
6. Source and Creator
7. Malicious Species
8. Sleeper
9. Ignis Fatuus
10. Larva to Chrysalis