In a time when current death metal acts can be broken down into two common styles, which both share a need for innovation and identity, Milwaukee prog/tech Death Metal Unit ARA presents The Blessed Sleep to give the genre the shot of artistic savagery it needs. Rather than littering their compositions with flurries of notes that champion an alienating complexity over songwriting craft and still not falling victim to the tongue-in-cheek homage riffing that makes up the old school revival, ARA delivers five songs that bear no compromise to the current sounds that pass for extreme and instead carves an identity for itself where few debut releases dare to tread.

Comprised of members of progressive instrumental band Concentric and sludge band Northless, ARA weaves layers of melody into its songs without sacrificing the brutality of each one, and balances tunefulness and discordance with ease. Dynamically versatile and still youthfully rabid, ARA successfully merges a technical approach with catchy arrangements to present a record that both initially devastates the listener and still lingers in the head long after it’s over, a technique lost among many who attempt the style currently. In a mere 21 minutes, ARA makes clear they are hungry to approach the mantle of death metal’s elite, and with The Blessed Sleep, the band is well on its way.

Stream The Blessed Sleep in its entirety at www.arawi.bandcamp.com.

Check out video footage of ARA in action at this location.

ARA is a 4 piece progressive/technical death metal band, featuring members of the bands Northless and Concentric. ARA began in early 2012 as a culmination of the desires of one Jerry Hauppa and Erik Stenglein to play in a death metal project that borrowed from their influences, without being mere carbon copies. Both Jerry and Erik have/had played in multiple Milwaukee area bands throughout the last 12 years, enjoying performing and creating various styles of music, but they had never realized their goal of creating stark, dissonant, yet strangely melodic brutality until deciding to try and play some death metal riffs together one day in their practice space. This jam led to full songs and of course, the inception of ARA. Soon after, Jerry recruited longtime musical collaborator James Becker (Concentric, ex-Forever Is Forgotten) and Adam Bujny (ex-Gaspar Minga) on bass and vocals, respectively, and they filled out the sound in a way that led to the formation of material found on The Blessed Sleep, which the band released to the masses in early 2013. 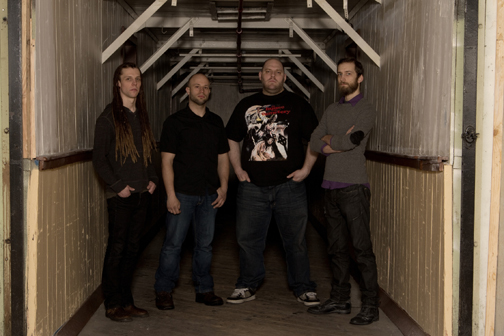