Metal Mind Productions presents the exclusive double re-release of two albums by Gorefest – “False” and “Erase”. This Dutch band was founded in 1988 as a death metal outfit by Jean-Chris De Koeyer, Frank Harthoorn, Alex van Schaik and Marc Hoogendoorn. Within two months after its conception these four death metal enthusiasts recorded a death metal demo which featured one of the most low-pitched and cavernous voices ever heard in death metal. Soon after that a Dutch independent label Foundation 2000, signed them for one album deal. Their debut album “Mindloss”, produced by the well-known British producer Colin Richardson, was released in 1991. During their career (disbanding in 2009) they recorded seven studio albums and today Metal Mind Productions re-release two of them – “False” (1992) and “Erase” (1994).
“False” was recorded in the summer of 1992 at Ron Koning’s Studio in Vrouwenpolder, again under the inspiring watch of Colin Richardson. According to many it’s the ultimate Gorefest work. The brute force of Gorefest was captured in tracks such as “The Glorious Dead”, “Get-A-Life”, “False” and “From Ignorance To Oblivion”. Aggression and skill were finally molded in perfect balance. “Erase” was recorded in 1994 with producer Pete Coleman and revealed a more mature Gorefest with a different attitude towards traditional death metal. As a result, public opinion towards Gorefest was divided. “Erase”, however, proved to be a success as international sales went well through 1994 and 1995. The band reached a broader set of countries in the following tours.

The double digipak edition of “False” and “Erase” is limited to 2000 copies. Remastered using tube technology, digitally edited on golden discs. The release date is scheduled for March, 27th in Europe and June, 6th in USA (via MVD). 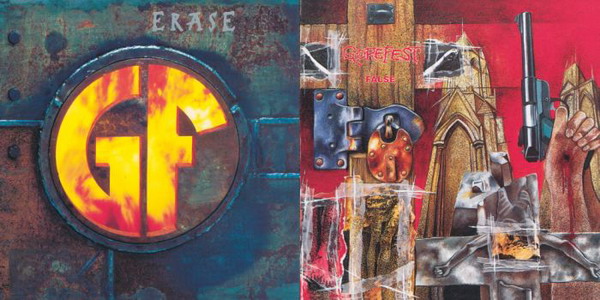 Gorefest, One Man Army And The Undead Quartet, Before The Fall – Koncertbeszámoló