After 5 long years – THE FLOWER KINGS are back with a new album. They emerged as one of the most famous bands of the early 90´s Prog scene and became one of the leading new icons together with Porcupine Tree, Spocks Beard and Dream Theater. The new album is called “Banks Of Eden” and will be released on June 18th, 2012 in Europe and June 19th in the US via InsideOutMusic.

In the light of the album’s impending release date, THE FLOWER KINGS are now debuting a medley of the almost 26 mins long opening track “Numbers” via UK’s Prog Magazine exclusively here:


“Banks Of Eden” was recorded with the band playing live in one room in a studio in January 2012, a recording much like in the old days of classic prog.

“We aimed for the classic big warm vinyl-sound of old records by Queen, Genesis, Zeppelin or Deep Purple,” says Stolt.
The music contains most of the trademarks that put The Flower Kings at the top of modern Prog.
The theme, or the “concept”, of the album is the struggle between a world in constant motion and in addictive consumption, and on the other side, finding a place and a little time where our souls find rest and peace.

“The album is a reflection of my thoughts on the world of today, I would say. I think this is where Roine Stolt as a person stands today. There are elements of both politics and religion, but I try to write lyrics without lecturing the fans. Still I always try to put something of a true wisdom of life or poetic beauty into the lyrics that hopefully stays with them.” added Stolt.

Here is the tracklisting incl. the 4 bonus tracks: 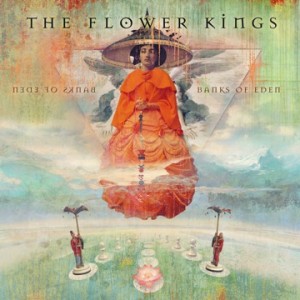 Extra Material:
Interview with the band in the studio – video feature

here’s the link to the pre-sale of Banks Of Eden through the InsideOut webshop:
http://www.insideoutshop.de/Search?q=flower+eden