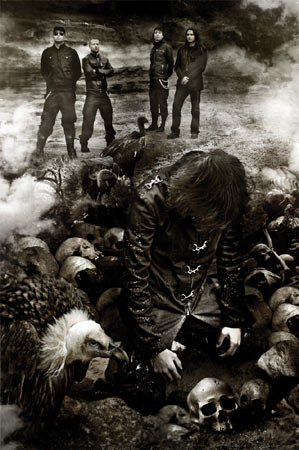 There’s only a two years gap from the release of the dark masterpiece “Oionos” and yet the Italian gothic-doom band THE FORESHADOWING is ready to get back in the store.

In the last two years the band had an intense live activity hardening its live performance and becoming one of the most appreciated live act of the modern doom scene. After shredding the crowd at worldwide famous festivals like Summer Breeze Open Air and Wave Gothic Treffen, travelling around Europe on tour and sharing the stage with the most important acts of gothic-doom scene (Katatonia, October’s Tide, My Dying Bride, Saturnus, Isole…) the band is finally back to give birth to the awaited third chapter of its gloomy apocalyptic saga.

Title and tracklist are still secret but interesting details will be revealed soon through their official Facebook page, together with clips directly from the studios. Mixing and Mastering will take place at the mighty Unisound Studios in Sweden by the living legend Dan Swanö (Asphyx, Dark Funeral, Katatonia, Edge of Sanity, November’s Doom, Opeth, Pain just to name a few) while artwork will be committed to Travis Smith (Opeth, Anathema, Katatonia, Nevermore, Amorphis and many others).

“This is gonna be, without any reasonable doubt, absolutely metal” states guitarist Alessandro Pace “we worked hard to step forward and gaining our melodic side, while at the same time we wrote the most groundbreaking rhythms we ever played. This is gonna be an album with no compromises, it’s gonna be a blast!”.

Recording sessions have been held at well-known Outer Sound Studios in Rome with the old time friend Giuseppe Orlando (Novembre, Klimt 1918, Stormlord, Necrodeath etc.) and mixing is about to be finished.

The album will be released worldwide by Cyclone-Empire in spring 2012, stay tuned for upcoming news and the band studio diary.

THE FORESHADOWING – Days Of Nothing