The superheroes are here! Check out J.D. Overdrive’s first video!

The video for the song “Ballbreaker” can now be watched on Metal Mind Productions’ official YouTube channel. Watching the superheroes traversing the streets of Katowice, Poland, you can easily see that the most important thing for the band while shooting the video was having loads of fun. Wojciech ‘Suseł’ Kałuża, band’s vocalist, says: “Basically we just wanted to have fun with this video, hence the whole goofy superhero theme. On one hand we take our music really seriously, but on the other we’re not really serious people. I hope this video proves it. And sure, the quality of the production might have been a bit better but then again, we saved a lot of money for booze. And you can’t go wrong with that.”

The song “Ballbreaker” comes from J.D. Overdrive’s debut album “Sex, Whiskey & Southern Blood“, which features eleven stoner metal songs that all fans of such bands as Down or Black Label Society will certainly find to their liking. The album has been released by Metal Mind Productions on 6th June in Europe and on 12th July in USA (via MVD). 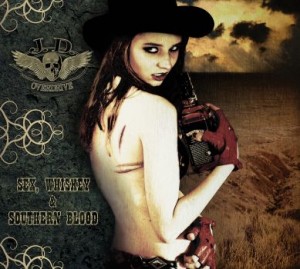