UK Doomsters The Prophecyhave revealed the cover art and track listing for their new album, entitled “Salvation”, due on January 21 via Code666 records. The follow-up to 2009’s “Into the Light” was produced and mixed by Greg Chandler (Esoteric) at Priory Studio and mastered by James Plotkin (Sunn O))), ISIS and Pelican). 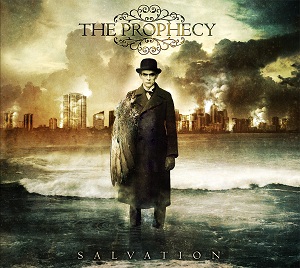 Frontman Matt Lawson commented on the cover artwork: “The album cover is a departure from the style of the last three albums, but when Code666 announced we could package the disc in glorious digi-pak with a 12 page booklet we couldnt help but go to town a little. The design fits the music perfectly and really captures the feel of the album. Sam at Dose Productions has done a fabulous job with the art and layout making this a product you’ll really want to own.”

Hot News: The Prophecy extend deal with code666/Aural Music and is mixing the new album