After an extremely busy Summer playing the likes of Download Festival, Brutal Assault, Hevy Festival and supporting heavyweights Gojira, the band are extremely excited to be heading out on a month long tour with Periphery and Between The Buried And Me.

Guitarist Derya ‘Dez’ Nagle had this to say about the upcoming shows:
“It has been a while since we last toured Europe and the UK and quite frankly, we can’t wait for it. Between The Buried And Me are one of our favourite bands and to share a stage with them every night for over a month is just awesome. Then to be reunited with our brüs in Periphery are our US stint with them will no doubt be a fun time for all. We shall see you at the shows, come by the merch stand and get involved in the jokes!” 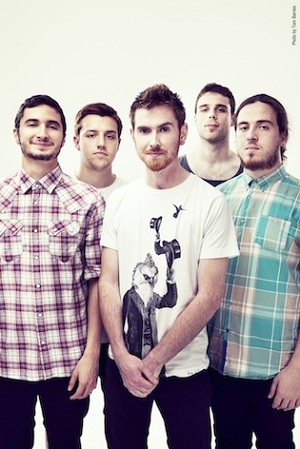 The band have also released the Edmonson Remix Video of Huge Hammers, taken from the special edition of the debut album Grind The Ocean which was released earlier this year. You can check that video out here: http://youtu.be/fPSiirmi088

And you can find the tour dates below:

The Safety Fire has always pushed the boundaries of technical, progressive metal since their inception. With their expansive atmospheres and soaring melodies, it’s easy to see why vocalist Sean McWeeney, bassist Lori Peri, drummer Calvin Smith and guitarists Derya Nagle & Joaquin Ardiles are now at the forefront of their ever growing genre. The Safety Fire released their debut album ‘Grind The Ocean’ to critical acclaim at the beginning of April this year through InsideOut Music.

“Right now the UK progressive metal scene is extremely healthy, and the emergence of The Safety Fire is about to provide another boost.”
Metal Hammer

“Akin to a meticulously designed but unpredictable cluster bomb”
Kerrang

“Complex forwarding thinking metal… You have to be pretty damned good to stand out from the crowd these days. London crowd The Safety Fire do so by using the oldest trick in the book – by writing proper, solid songs”
Rocksound

For more information about the band, check out: www.facebook.com/thesafetyfire

Hot News: The Safety Fire stream ‘Mouth of Swords’ ahead of release

Hot News: The Safety Fire to enter studio in March for sophomore album

Hot News: The Safety Fire – Announce European Tour with Between The Buried And Me and Periphery and release new video for second single “Floods Of Colour”