Elaborates THE SOCKS in a collective statement, “The sound and identity of the band have been shaped through the years to become this psychedelic hard rock, meant to be played live. We’ve recorded all together in a room with analog tapes to focus on the energy and to make it sound real and raw. Now it’s time to take it with us on the road and share it with everyone!”

The Socks will be released via Small Stone Recordings on March 18, 2014. Further info, including preorder links, to be unveiled in the coming weeks. In the meantime, check out THE SOCKS‘ video for second track “Some Kind Of Sorcery” at THIS LOCATION. 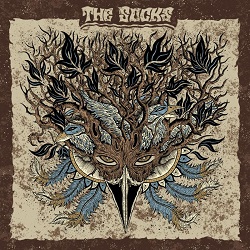 Some bands simply sound like they were born to do it, and listening to the classic heavy rock groove of THE SOCKS, there can be no doubt it’s what they’re made for. They’re naturals. The duel-guitar French foursome formed in Lyon in 2009 and began surprising audiences almost immediately, eventually settling down to pump out their debut EP the following year. 2010’s Side A offered up five well concentrated songs from a band still finding themselves. Inspired by the teachings of Sabbath and Zeppelin, THE SOCKS supported the release by playing with an array of national and international acts, boasting intensely energetic gigs while continuing to develop their style. The next two years drove the band to write darker, heavier, songs that were more calculating and less frenetic. The resulting 2012 EP, Bedrock spouted a pseudo psychedelic, neo-grunge moodiness that proved captivating upon first listen.

The Soda Shop dubbed it “some pretty epic fucking stoner rock,” while Church Of The Riff opined, “The entire EP shows that THE SOCKS know how to write damn good songs. Everything sounds fleshed out and exciting, without ever getting repetitive or redundant…The riffs, vocal harmonies, tasteful solos and keyboard work show a band that knows exactly what they are doing.” The record eventually caught the ears of Small Stone Recordings. During the Fall of 2012, THE SOCKScompleted their first European tour. Drawing on experience garnered from festivals and gigs alongside Karma To Burn, Red Fang, Truckfighters, Horisont, Mars Red Sky, Black Rainbows and many others with whom they share various elements while still maintaining a personality all their own, they were instant crowd pleasers. As the band continues to thrust themselves into Europe’s next generation of heavy rock ‘n’ roll beside acts like Abrahma, Deville, Asteroid, Isaak, Black Rainbows and Mother of God, Small Stone is pleased to bring their debut full-length to the masses this March.