Justin Oakey – famous for his music videos for HEXVESSEL, Ulver, and Hooded Menace – will begin shooting his debut film, The World is Burning, this spring. Mat McNerney of HEXVESSEL is currently writing exclusive music for the film, which will be released by SVART RECORDS on seperate CD/DVD and LP/DVD sets during the autumn of 2013.

As part of the funding campaign for the short movie – going on until the end of January at Indiegogo – interested parties can purchase a limited-edition colored vinyl version of the soundtrack, of which only 100 will be made, courtesy of SVART, for 50 CAD including worldwide shipping. Also available to pre-order via the campaign site is the CD/DVD version, also to be released by SVART. The campaign has already gone over the 5000 CAD goal, but all extra funds are welcome and will be used to make the film sets more lavish. More info on the film can be found at www.indiegogo.com/theworldisburning. 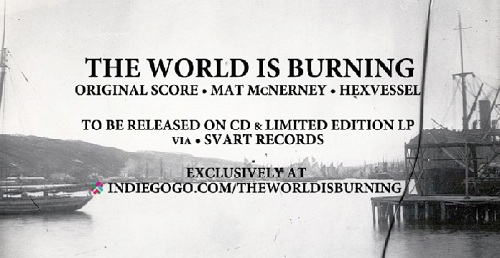 The World Is Burning is a short narrative film set in Newfoundland, written and to be directed by Justin Oakey. The story focuses on a young man living in Toronto. After learning his grandfather was fatally attacked by coyotes, he returns to rural Newfoundland to be with his family. His return becomes a reunion with a traditional lifestyle he had left behind when, late one night, he finds himself deep in the forest hunting the coyotes.

The film primarily takes place during Newfoundland’s distinct (and excessive) winter season, so you can expect snow-covered trees, icy waves crashing against the coast, and gorgeous depictions of rural life on the island. Shooting will take place in Fortune Bay, NL as well as in St. John’s, NL and Toronto, ON.

The story explores the disintegration of the bond between a man and his land. The main character has a strong connection to his roots and traditions, but has left them behind in order to follow what he thinks is the “conventional” path. At its heart, it is an examination of culture and identity.

We believe it will resonate with people around the globe, who feel the ache of being away from home. The story is influenced by Justin Oakey’s personal life and came about when his grandfather was pursued by coyotes on his land, in a very small community on the south coast of Newfoundland.

THE CREATIVE TEAM
Justin Oakey (writer/director) is an avid outdoorsman born and raised in Newfoundland, and a graduate of Ryerson University’s Film Studies program. In recent years, he’s been directing short narrative work and music videos, including work for internationally acclaimed artists such as the Spellemann-nominated Ulver (Norway) and Emma-nominated HEXVESSEL(Finland).

Amanda Row (production designer) is a multi-talented Torontonian filmmaker and artist who frequently collaborates with the director, completing nearly a dozen projects together in the past year.

Adam Reynolds (producer), also from Newfoundland, began collaborating with Justin and Amanda earlier this year and has since produced a wide variety of projects.