Therion are busy making final preparations to celebrate their 25th year anniversary of the band and to release the new album “Les Fleurs du Mal” during the tour. The tour is going to include 26 cities.

(Stockholm, September 2012) – Up to this moment, none of the songs have been made public. From Friday September 28th on, Therion is going to introduce it for the first time to their fans during their “Flowers Of Evil” 25th year anniversary concert tour.

The album “Les Fleurs du Mal” is a part of an art project that Christofer Johnsson has been thinking about for some years.

“The time was never right for it, but in celebration of the band’s 25th year anniversary, I thought now will finally be the right time for it,” Christofer Johnsson explains. 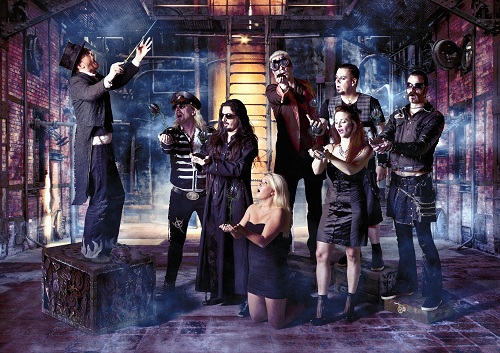 There are still many details that are unknown about this mystical art project, and so far only the album title “Les Fleurs du Mal” of Therion’s upcoming release can be officially announced. The album title refers to Charles Baudelaire’s (French author and poet 1821 – 1867) famous poem collection “Flowers of Evil” (“Les Fleurs du Mal” in French) that caused such an upset of emotions in France that the author was brought to court and got fined for “insulting the public” with six of the poems, that remained forbidden in France until 1949 when the ban was finally lifted. The spirit of the project is a tribute to Baudelaire, and is imbued into both music and artwork. The album was recorded at Adulruna studio, located in a separate building next to Johnsson’s decadent “Villa Adulruna” where the band lived together while recording.

Christofer states that this art project: “Was being too controversial for Therion’s label, Nuclear Blast Records, by the final results, so I asked if it was possible to buy back the master tapes of the record and release it on my own label. And after some negotiations, my wish was granted.” “But Therion of course is still signed to Nuclear Blast Records for future releases,” Christofer clarifies.

By having full control of the release now, Christofer has decided to do everything his own way, and starts by releasing the album to the loyal fans first that come to the concerts in Europe during Therion’s 25th Anniversary “Flowers of Evil” tour. The album will of course also be officially released and distributed at a later stage to everyone who is not able to attend any of the shows, and will also be available through licenses to the territories outside of Europe.

Christofer explain that “This is the beginning of a new period that will last for a number of years, where the band will focus on doing certain projects performed by Therion rather than releasing regular albums. In the planning after the art project is a rock opera that is scheduled to take several years to complete.”

Now during Therion’s “Flowers of Evil” and the band’s 25th anniversary tour the audience can expect a classy performance which combines all the elements which have been the key to Therion’s success throughout the years.

Below is the schedule of the upcoming Therion tour dates.

Therion: The Best Of Tour ’16 – Koncertbeszámoló

Hot News: Therion – trailer on »Adulruna Redivia And Beyond« posted!