U.S. Progressive Metallers THOUGHT CHAMBER are finally back with a new release, following up on their acclaimed debut album “Angular Perceptions” from 2007. Their sophomore album “Psykerion” is OUT NOW all over Europe (North American street date is October 1st, 2013) via InsideOutMusic.

In order to further whet the appetite, you can now check out the song “Psykerion: The Question” either here: http://youtu.be/soAOinOZZEk

THOUGHT CHAMBER’s mastermind Michael Harris checked in to comment the track as follows:
“Musically here we get into some darker prog, bring in the album’s first vocals, and in the chorus we return to the album’s musical theme, which was stated instrumentally earlier in “Inceptus”, and now vocally. Lyrically our main character Avakus, describes the Kerakryp’s voyage, mission’s purpose and impending danger.”
A first audio sample for the album “Psykerion” was previously launched via the IOM YouTube channel, where you can check out the song “Transcend”: https://www.youtube.com/watch?v=8xS0KfCxlWg 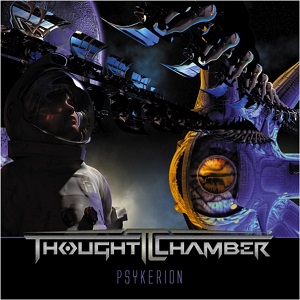 The first pressing European CD edition of “Psykerion” will come with an O-Card packaging and two additional bonus tracks (“Isle of Bizen [acoustic version] and “Recoil [instrumental version]”).
It can be ordered from the IOM webshop in Europe here: http://www.insideoutshop.de/Item/Thought_Chamber_-_Psykerion__-_Ltd-_Edition/15907

“Psykerion” contains 16 tracks / 64 minutes of superb true progressive metal with a technical sci-fi twist, likely to appeal to fans of Dream Theater, Yes, Rush or Planet X. The album’s cover artwork, which can be seen above, was designed by John E. Holland / MistyMountainGraphics.com. The album was recorded in various locations between 2012 and 2013 and finally mixed and mastered by Tom Size (Y&T, Aerosmith, Mr. Big, Enchant) at Tomland Studios, Pacheco, CA.