Guitarist Hiram Lohr of melodic death metallers THOUSAND YEAR WAR  has recently hooked up with the makers of KrashBurn Guitars for an endorsement deal. The Redding, CA based company and Hiram are currently working together to design a custom, handmade axe built exclusively for the guitarist. For more on KrashBurn Guitars, visit www.krashburnguitars.com or on Facebook at www.facebook.com/jimkrashburn.

In other THOUSAND YEAR WAR news, the band is currently working on a new EP to follow  their full-length debut, Tyrants and Men, which was released last year on Abyss Records. The EP will contain six tracks, including a cover of the Misfits’ “London Dungeon.” All instruments and vocals have been recorded and the tracks have been turned over to Fredrik Lunneborg of Primecut Studios in Sweden, who will handle mixing and mastering duties. More details on the EP are forthcoming. 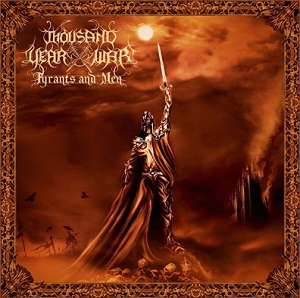 The history of Thousand Year War began in the winter of 2008 in Haines, Alaska with Hiram Lohr (guitar, vocals) developing ideas that would become the first Thousand Year War demo under the name Shadow of the Colossus. Former TYW member Kellen Sharp had joined on guitars for the EP and future full length Tyrants and Men. These four songs were recorded by Brett Wehmeyer at Runefire Recording Studios in Anchorage, AK. With the help of Brett and session drummer Mortaeus (Ax) TYW was able to get their first recording off the ground. After receiving good reviews and label interest from their self-titled EP, Thousand Year War decided to take things to the next level and record a full length album.

The EP is available for free download at www.thousandyearwar.com

Months after the first EP TYW went in to record with Ryan Brownell (Garden Studios).In a period of seven days they recorded vocals, guitars, and bass to found session drummer Fredrik Widigs (Angrepp, Desultor, The Ugly). After transposing all the songs to Guitar Pro they were sent to Fredrik to record the drum tracks at Prime Cut Studios (Sweden), in the summer of ’09. Shortly after 10 tracks were laid down to what would become the full length Tyrants and Men

From the summer of 2010 and beyond, Fredrik Lunneborg of Primecut Studios came up with an amazing mix that sculpted and formed the final sound of Tyrants and Men. This mix was presented to Dan Ferguson of Abyss Records and Thousand Year War was offered to sign.

Kellen Sharp was removed from the band for personal reasons and Fredrik Widigs(Ex-The Ugly, Witchery-Live Drums, Ex-Angrepp) and Pablo Magallanes (Live guitarist- Demonical,Interment) was brought on for the recording of the upcoming EP Vulture Eyes The EP will feature six songs, including a cover of Misfits “London Dungeon.”