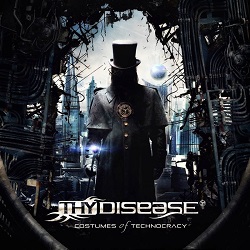 Thy Disease release of their new album “Costumes of Technocracy” on 14th February. The record will contains 10 songs with an industrial groove-metal feel. The track “Slave State” is the first single to be taken from the album. The video accompanying it was produced in cooperation with Red Pig Production (Decapitated, Hate, DVD Covan WTFU), you can watch it here: –

“Costumes of Technocracy” was recorded in Creative Music Studios and mixed and mastered by Tomasz “Zed” Zalewski. Piotr “Szafa” Szafraniec created the cover art (above). Two vocalists can be heard on the record: Psycho, frontman of Thy Disease and Adrian “Covan” Kowanek, whose vocals were rocorded in 2005-2006 during his work with Atrophia Red Sun.

Hot News: Thy Disease – Working on their 6th studio album