The awesome new THYRFING album “De Ödeslösa” will be released on March 1st 2013! The band has also unveiled the album cover and the tracklist.

Thyrfing have delivered their very own brew of metal music since 1995 and after six full-length albums and numerous live performances the band now releases their new album called „De Ödeslösa“, still carrying the integrity and trademarks known since the self-titled debut album in 1998, brought forth through „Valdr Galga“ (1999), „Urkraft“  (2000), „Vansinnesvisor“ (2001), „Farsotstider“ (2005) and „Hels Vite“ (2008). It marks their first new studio album in five long years and is eagerly awaited among both fans and media. They have gained a strong following over the years and an exquisite standing within the metal scene and are considered one of the top notch bands with in viking/pagan metal, but on the other hand, THYRFING are so much more with their truly outstanding and self-contained musical offering.

Mid of 2012 the band signed a new deal with NoiseArt Records and Rock the Nation booking and soon after they started recording the new album, which will be released on March 1st, 2013. The drums were recorded in Soundtrade studios with Joy Deb (Siebenbürgen) and the rest of the album was done in Deadbeat Studios. The mix and mastering was taken care of by Jens Bogren (Kreator, Amon Amarth, Opeth, Soilwork) at Fascinationstreet Studios. 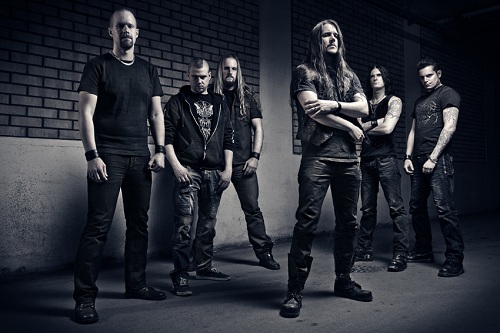 The band name is taken from the sword „Thyrfing“ in Scandinavian mythology – a cursed blade that appears in several tales and myths. From the end of February on the band will be on the so-called PAGANFEST tour.

Get your tickets and fan packs here: www.hardticket.eu.