Due to scheduling conflicts, singer Antony Hämäläinen will be unable to perform with multinational thrashers NIGHTRAGE at the Gothenburg Sound Festival on January 5 at Trädgårn in Gothenburg, Sweden. His replacement for this show only will be NIGHTRAGE‘s former frontman Tomas Lindberg from AT THE GATES. NIGHTRAGE states: “We are super-excited about this!”

Comments Antony Hämäläinen: “So, as some of you may already know, the band has been selected to play the Gothenburg Sound Festival in January. Unfortunately, due to some scheduling conflicts I was unable to resolve, I will have to miss this show. It will be the first NIGHTRAGE show in six years that I will miss and it completely sucks!

“This festival’s lineup is of legendary proportions (CEREMONIAL OATH, GARDENIAN). But fear not… I am proud to announce that we are going to just tack one more to that list of legends for our friends and fans in Sweden. That’s right, the one and only Tomas Lindberg will be helping us for this one-off show. And it’s safe to say I am jealous as fuck not to see this take place. I have also seen the setlist for this show, and let me tell you, no one will be disappointed.” 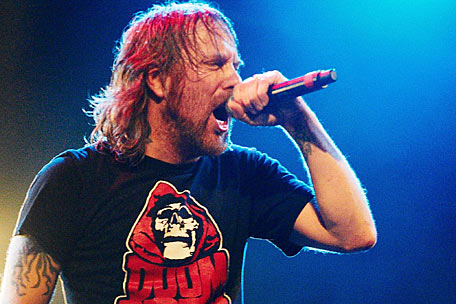 Lindberg — who is also known for his work with THE CROWN and LOCK UP — appeared on NIGHTRAGE‘s first two albums (2003′s “Sweet Vengeance” and 2005′s “Descent Into Chaos”) before being replaced by Jimmie Strimell, who sang on 2007′s “A New Disease Is Born”.

Video clip for “DELIRIUM OF THE FALLEN” taken from the album “Insidious” can be found here: http://youtu.be/9XVxaMvTvBs

Hot News: Nightrage – Reveal video for “Delirium Of The Fallen”!

Hot News – Nightrage track by track for "Insidious" – part I!