About a year has past since the ultra-heavy Norwegian three-piece, TOMBSTONES, unleashed their debut on Soulseller Records. Now, time has come for their follow-up, and their third studioalbum to date. TOMBSTONES has been brewing on dirtier filth this time, and the new album; “Red Skies and Dead Eyes” is here to tear holes in your ears and speakers. On this album more space are given each instrument, and you can feel the pulsation of each song. Norwegian doom has never been played with weightier confidence, and the riffs and grooves penetrate your soul like a demon from ancient times. “Red Skies and Dead Eyes” gives you 44 minutes of blackened doom, and will leave you on your knees, crushed by a thundering roar arisen from the dark Norwegian woods. During live recording-sessions in May 2013, TOMBSTONES paired up with the best from their past. Both Petter Svee from “Year of the Burial” and the US-legend, BIlly Anderson from “Volume II”, are twisting the knobs on this album. To state the obvious, the sound on this slab of doom is earth-shattering. Artwork Courtesy of Glyn Smyth.

You can check out two of the new songs on youtube: 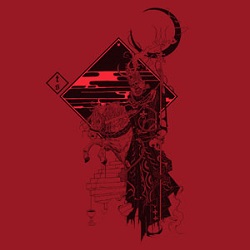 TOMBSTONES – Year Of The Burial