Torche, the Florida-meets-Georgia quartet whose album Harmonicraft, was proclaimed “one of the strongest guitar-rock records 2012 will yield” by Alternative Press, have signed with Relapse Records.

“We’re looking forward to working with a label that has stood the test of time while continuing to expand their diverse roster.” Explained Jonathan Nuñez, adding, “Releasing this record on Relapse lined up pretty well since it contains some of the heaviest songs we’ve written to date.”

Torche are often cited for their masterful combination of melodic songwriting and heavy music, with Spin dubbing their music “sludge-pop” and Filter saying the band proves “a heavy-rock band can be optimistic and sincere-without sacrificing any of the edge.”

The band is currently recording at Pinecrust Studio in Miami with Nuñez serving as producer and Converge’s Kurt Ballou mixing the album. The as-of-yet untitled album is expected to come this Summer.

The band’s most recent material can be found at torche.bandcamp.com. 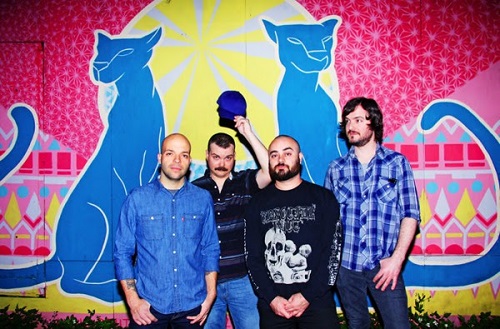 Torche are a band consisting of four dudes playing the loudest and heaviest hard rock on the planet.  Formed by vocalist / guitarist Steve Brooks in 2004 after the dissolution cult, sludge / stoner metal pioneers Floor, the group introduced the world to a refreshingly unique version of rock n’ roll. Torche have spent the last 10 years shattering ears and captivating crowds with their infectiously original heavy rock complete with soaring, harmonic vocals.

The band has released three full-lengths and a series of EPs / splits with such revered labels as Hydra Head, Robotic Empire, Volcom and Amensian and has toured relentlessly with a diverse pool of acts including Mogwai, Hot Water Music, The Sword, Isis and many more. In early 2014 the band signed with renowned label Relapse Records and entered the studio to record their highly anticipated fourth full-length and follow-up to 2012’s Harmonicraft.