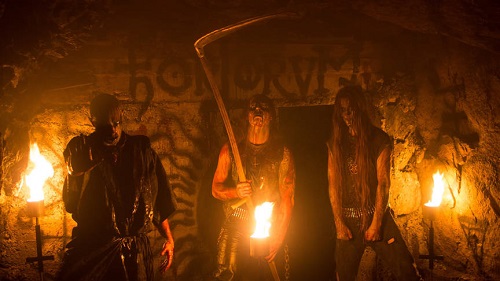 W.T.C. PRODUCTIONS announces March 8th as the international release date for TORTORUM‘s second album, Katabasis.Following on from their celebrated Extinctionist debut, TORTORUM waste little time in upping the ante for inventive, widescreen black metal orthodoxy with Katabasis. The pan-international trio’s second album, Katabasis is unremittingly dark yet colored with shades of texture generally beyond the purest-of-the-pure hordes: TORTORUM strike deep into the burning heart of black metal whilst exhibiting dazzling ‘n’ daring compositional prowess. Each song is an epic in its own right, and a cursory scan of the album’s song titles – “In Nameless NonBeing,” “Into the Sixth Coil,” and penultimate closer “Beyond The Earth And Air And Sun – reveal that the band’s lyricism is as deadly committed to transcendence as their multi-hued music. The black sun rises, and it shines upon TORTORUM… Katabasis was conjured during the fortnight of the dying moon following the summer solstice of 2013 at Necromorbus Studios, Sweden, and was engineered, mixed, and mastered by Tore Stjerna (Watain, Marduk). The album’s cover art and all artistic expressions were created by David Glomba (Cult of Fire, Inferno). First track premiere to be announced imminently, but in the meantime, cover and tracklisting for Katabasis are as follows: 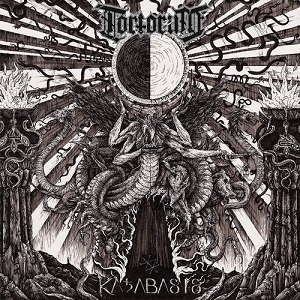 Tracklisting for TORTORUM’s Katabasis
1. Descensus
2. The Great Appetence
3. In Nameless NonBeing
4. Severance and Perseverance
5. As The Light Falls to Slaughter
6. Into the Sixth Coil
7. Open Wide the Gates of Chaos
8. Attributions to the Dead
9. Beyond the Earth and Air and Sun