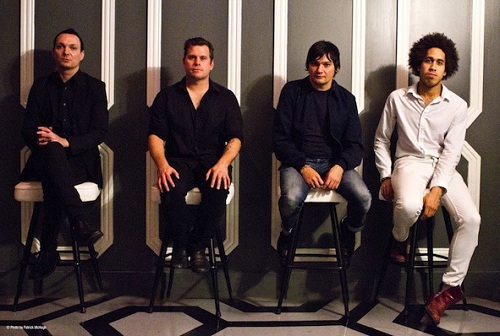 Austin, TX natives …Trail of Dead announce the title and release date of their 8th full length album and joined forces with (Germany: Visions Magazine) to premiere the first track called “Up to Infinity” at the link further below:

Hello, we are …And You Will Know Us By the Trail of Dead. This is our eighth album, it was recorded this summer in Hannover, Germany. The music was inspired by the apathy to real world events that has plagued the independent music scene now for over a decade.
The first preview of our album, entitled „Up To Infinity”, is about the Syrian civil war. We believe that tyranny and despotism suffered by any people, anywhere, is intolerable and should not be treated as an internal matter, but completely justifies intervention by the international community.

We would like to also dedicate this song to Pussy Riot.

“Up to Infinity” song premiere at VISIONS: http://www.visions.de/news/16792/Trail-Of-Dead-Up-To-Infinity-Songpremiere

“UP TO INFINITY” LYRICS
The darkest days they lie before us
The world, a monster coming back to eat her master
Remember when we bathed with candles
The granite eyes of Horus
Danced about our naked mantles
This cross, which cross
Which cross is the one
This cross, which cross?
You‘ll hang the witches from?
A mother screams, a child answers
Her flesh is ripped apart and dashed upon the flagstones
A father cries, a soldier dances
Streets of fire, raped bodies piled among the ashes
Which son, which son, Which son is the one?
Is this son the one you waste your kingdom on?
The seven songs of spring
A dish to set before the king
The solemn secret signs
For those who died before their time
The fallen king is found
His mouth is gagged his hands are bound
The seven fiddlers play for those
Who won‘t survive this day
A mother screams
Which son is the one?

Trail Founders Conrad Keely and Jason Reece will be rejoined by mainstay members Autry Fulbright and Jamie Miller who appeared both on the album and onstage for the “Tao of the Dead” release.

For further info please go to:

Hot News: …And You Will Know Us By The Trail Of Dead reveal artwork for Tao Of The Dead Part 3 EP; less than two weeks left!

Hot News: …And You Will Know Us By The Trail Of Dead reveal pledgers-only snippet of Tao Of The Dead Part 3 EP

Hot News: …And You Will Know Us By The Trail Of Dead send video update from the making of their PledgeMusic EP Tao Of The Dead Part III

Hot News: …And You Will Know Us By The Trail Of Dead unveil new video for Lost Songs

Hot News: Trail Of Dead – Songpremiere through The Fly and Spotify