TROLLFEST will release their brand new album „Brumlebassen“ on August 24, which they´ll perform for the first time ever live in its entirety at METALCAMP festival Slovenia (August 5 – 10). There´ll also be their very own TROLLFEST pavilion where they´ll host the so-called TROLLYMPICS – fun & games with TROLLFEST – as well as doing signing sessions, meet fans, take pictures… Furthermore there´ll be an exclusive acoustic set of TROLLFEST right down at the Metalcamp beach!

Make sure to check out the TROLLFEST camp at Metalcamp festival, the pavilion will be opened starting Wednesday, August 8. Get all your infos about the TROLLYMPICS, the signing sessions, acoustic show there and also grab free stickers, posters, postcards, too! As special highlight, you´ll be able to buy the new album as limited digi pack and vinyl exclusively at the pavilion upfront the official release date. Be the first one to own their new masterpiece and get your digi pack including your very own personal download code for 100 minutes of filmed TROLLFEST material, wallpapers, unreleased songs and more! The total TROLLFEST package!

“We are really looking forward to come back to Metalcamp and spend some time at the most beautiful festival in Europe. Besides the obvious joy of just being there, sipping a Mohito at the beach and checking out great bands, we are really excited about presenting our new material for the fans. Not only will we play our first ever acoustic show right there on the beach, we will also play our new album “Brumlebassen” in it’s entirety on Friday night (August 10)! So get your sunglasses and swimsuit ready, and come on down to the TrollfesT pavilion at Metalcamp and have a beer with us. See you there!”

With artwork by the Swedish cartoonist Jonas Darnell, who originally created the iconic metal duck from TROLLFEST’s “Villanden” album, and design by Terje Johnsen, the 13-track “Brumlebassen” is set for release on NoiseArt Records on August 24 of this year in both limited edition digipack format and gatefold vinyl.

The band are also confirmed to play this year´s edition of HEIDENFEST alongside Wintersun, Korpiklaani and others. 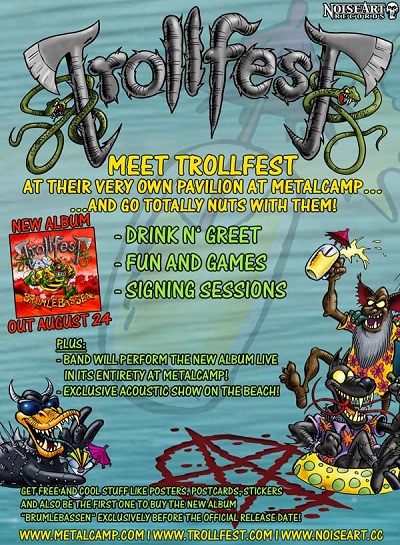