Oslo’s self-styled True Norwegian Balkan Metallers TROLLFEST have today unveiled the artwork for their upcoming album “Brumlebassen”, which is due for release on NoiseArt Records in August of this year. Responsible once again for the amazing images that vividly depict the story of what will be the band’s fifth full-length album, is Swedish cartoonist Jonas Darnell, who originally created the iconic metal duck from TROLLFEST’s “Villanden” album, and has worked with the band ever since. Terje Johnsen, who has been working on the design side of TROLLFEST’S releases since the “Brakebein “album, has once again teamed up with Darnell to produce the finished package.

Like all TROLLFEST’s albums, “Brumlebassen” tells a story about one of the characters that inhabit the fantastical universe created by the band. This time the story is about Brumlebassen the Bee Keeper, whose task it is to care for the bees and brew the Honey Mead that is much loved by the Trolls. Brumlebassen adores his bees so much that he would secretly like to become one of them himself and he is therefore depicted wearing a bee costume! Track listing for “Brumlebassen”, which will be available as a Gatefold vinyl and limited digi pack including 12 tracks plus a bonus track, is as follows: 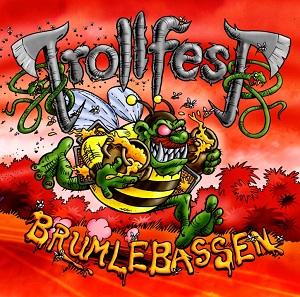 TROLLFEST, known for their exuberant stage performances which have won them myriads of fans wherever they play, recently announced that Tor Einar Rognhave (stage name St Beinhard) would be joining the band as a permanent member, to replace Per-Olav Wiik, whose personal commitments no longer allowed him the time needed for the extensive schedule of live appearances. Immediately after their show at Norway’s Inferno Festival the band set off for a 20-date European tour with KORPIKLAANI in April, followed by appearances at ExtremeFest in Austria, Germany and Switzerland in July, MetalCamp in Slovenia in August (where something special has been planned), and the Heidenfest Tour in Europe in October and November. A tour blog for the April tour will be available at http://trollfest.blogg.no/. More information about TROLLFEST can be found on the band’s website at http://www.trollfest.com