The self proclaimed “True Norwegian Balkan Metallers” TROLLFEST have released a track-by-track video breakdown of their latest release “A Decade of Drekkadence”, which is an exclusive, limited edition, Ten Year Anniversary Picture Disc containing new and unreleased material spanning the bands entire career. Performing the voice over on the video are Eric & Mark Dow from American Folk-Metlallers HELSOT who were on the recent PaganFest America tour alongside TROLLFEST. The video can be seen at http://youtu.be/MXsx8xia3qY

The sixteen tracks on “A Decade Of Drekkadence” include a completely new song, three covers, including songs from Tom Waits and Britney Spears, two B sides and the band’s 2004 previously unreleased demo which has been long-sought after by TROLLFEST fans. Also included are re-recordings of acoustic versions of three of Trollfest’s signature songs which the band performed during a special acoustic set at MetalCamp 2012. Each picture disc will include an email address that purchasers can contact to receive an MP3 download of “A Decade Of Drekkadence”. A video version of ”Toxic” the Britney Spears cover can be seen at http://youtu.be/rMy0KPz8Vvo

Artwork for “A Decade Of Drekkadence” is by long-time TROLLFEST collaborators Swedish Cartoonist Jonas Darnell and designer Terje Johnsen. The team have pulled out all the stops for the picture disc, which illustrates a selection of characters created by Darnell for various of the band’s releases, including the iconic metal duck from the “Villanden” album and the hellhound from the track “Helvetes Hunden Garm” which has been a consistent crowd pleaser at TROLLFEST live appearances. “A Decade Of Drekkadence” is only available directly from the band at http://trollfest.bigcartel.com/ 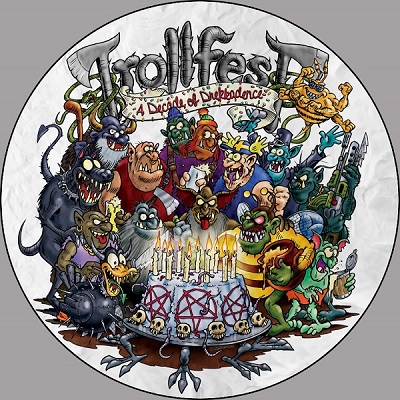