Norway’s TROLLFEST, a band known for using an eclectic, and somewhat unusual instruments, to create what it calls “True Norwegian Balkan Metal” is streaming a track dating back to the early days of the band’s existence, but which has never been released, although fans familiar with the TROLLFEST’s exuberant live appearances may have heard the track before. The band’s decision to make the track available a few months before the release of their fifth full-length album is best summed up by the close, and very interactive relationship TrollfesT has developed with its fans over the years: “While we were in the studio recording our new album we wanted to do something for all our fans while they wait for the release of “Brumlebassen”. One of the songs that often features in our live set is “Skogsfest”, which happens to be the third song we ever wrote, and was a part of an early TrollfesT promo that was never released. We know that this is a popular song with the audience at our shows, so we came up with the idea of re-recording it, and uploading it so that everyone can listen to it (it will not appear on the new album). And that’s exactly what we did! So if you’re coming to see us (and raise a few glasses together) on the KORPIKLAANI tour you may hear it then. But if you’re not, then you’re not going to miss out, because here it is – from us, to you”.

TROLLFEST have an extremely full schedule of live appearances and tours during 2012, including a tour with KORPIKLAANI in April, MetalFest in Austria, Germany and Switzerland in July, MetalCamp in August and the Heidenfest tour in October and November. Kicking off their live schedule in inimitable TROLLFEST style the band will bring a special show to Norway’s Inferno Festival when they hit the Rockefeller stage on the 5th April. The show goes under the name of “TrollfesT & The Devil’s Dangleberries Inferno Balkan Madness” and according to the band they will be joined on stage by “a group of slightly dodgy individuals known as “The Devil’s Dangleberries” who will be in charge of all the Balkan madness that will be unleashed. The Devil’s Dangleberries incidentally is the name we first thought of calling ourselves when we started out and before we decided on TROLLFEST”. The “good friends and superb musicians” who form the Devil’s Dangleberries consist of Per Olav Wiik (TROLLFEST, UNTIME) on Bouzouki, Morten Müller (DEAD TROOPER) on Bouzouki, Birger Larsen (GROTESQUE HYSTERECTOMY) on Acoustic Guitar, Harald Odland (SJU) on Acoustic Guitar and Jon Eirik Bokn (DEAD TROOPER, ZEROZONIC) on Percussion. 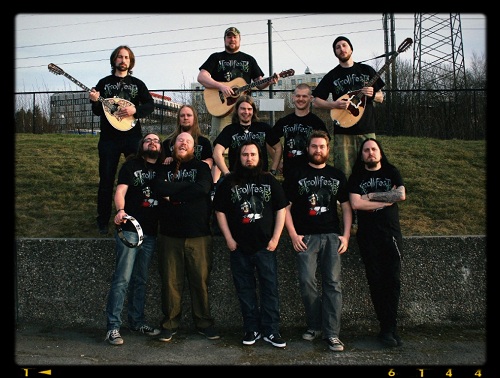 “Brumlebassen” itself is set for release on NoiseArt Records in the summer, and more information about TROLLFEST can be found at http://www.trollfest.com