With Brumlebassen, TrollfesT release their fifth studio album which was written between late 2010 through to the beginning of 2012. The recording and mixing was done with Marius Strand at Strand studios with additional acoustic recordings done in Trollbanks apartment. Mastering was done with Tom Kvåsvoll at strype audio and the the overall production was handled by TrollfesT. Guest-musicians like Vreth from Finntroll and Mariangela from Tristania also appear on the record.

Here you can watch a track-by-track video clip where TROLLFEST describe and explain the songs of the new album in their very own and unique troll style: http://www.youtube.com/watch?v=l0NbibItJPM

TrollfesT – the likeable embodiment of a highly acclaimed, serious party-band; on numerous tours such as Heidenfest and outstanding, very self-contained albums they have proved their skills and took a stand in todays metal scene. They have gained a huge horde of fans around the globe and have killed it on every single festival stage out there! Plenty of it is nonsense, crazy and fun with TrollfesT, but not all. They do take their music very serious and focus on their goal as a band – to let the fans and people – as well as themselves – have the time of their lives and enjoy themselves. On the upcoming Heidenfest tour with Wintersun, Korpiklaani and others they will again show everybody how it´s done and with their new effort “Brumlebassen”, things couldn´t look any brighter in Camp TrollfesT. 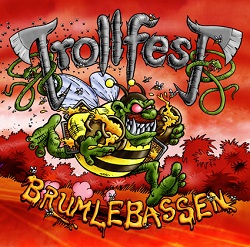 The album will be out as limited digi pack, gatefold vinyl and download including “Konterbier” as bonus track. The digi pack also includes an individual and exclusive download code for plenty of cool bonus material with 100 min of filmed stuff incl. the making of Brumlebassen, Heidenfest 2011 tour video, unreleased songs, screensavers and other content. It´ll be released August 24 via NoiseArt Records.