Ireland’s dirty rock n’ rollers TruckerDiablo are ready to storm the stages of countless festivals this summer, giving their ever-growing legions of fans many chances to come out, rock out and party with the boys. And you’ll never guess who they’re sharing the stage with.

Glascowbury, happening Friday 19th to Sunday 21st of July in Eagle Rock Valley, Draperstown, finds the boys rocking with such notables as The Answer, The Japanese Popstars, and And So I Watch You From Afar. Later, Planet Rock’s Steelhouse Festival brings the Irish rockers on to the stage with metal legends Saxon and Michael Schenker, as well as Magnum, FM and Anvil.

The Welsh Steelhouse Festival has earned a reputation as one of the must-see events of the summer Festival circuit, and Trucker Diablo is thrilled to share the stage with so many of their heroes. Smaller in size than some of the more massive festivals, fans and critics rave over the Festival as one of the best Hard Rock shows of the year. “A different flavour to other rock festivals, Steelhouse is up there – literally – with the best. KKKK.” – KERRANG

Glasgowbury is a multi-award winning music festival and music group, with a host of year-round activities aimed at supporting and enhancing the Northern Ireland music scene.(Northern Ireland – not Scotland!) Run by musicians, for musicians, Glasgowbury ignited a spark that has yet to be doused with 2013 being the most ambitious year yet. The festival expands to two day event and moves into a dedicated building in Draperstown.

The Trucker boys took 2012 by the throat and played a massive 40 shows, which including some key highlights from playing Hammerfest with Anthrax, supporting Foo Fighters at Tennents Vital, supporting Terrorvision on their UK tour, rocking crowds on the main stage at Hard Rock Hell festival and topping off 2012 by supporting their heroes Thin Lizzy in Belfast. Trucker’s second album Songs of Iron, will be released in May 2013 through Ripple Music and Bad Reputation (FRA). There’s a big open road in front of Trucker Diablo, jump on board, be a part of the convoy and catch them on tour in the U.K and Europe in 2013. 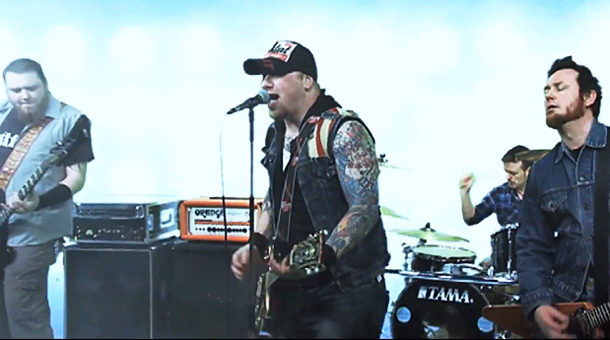